A lack of truck drivers has led to delivery bottlenecks and fuel rationing across the UK. Industry associations estimate Britain needs 100,000 more drivers to meet demand. 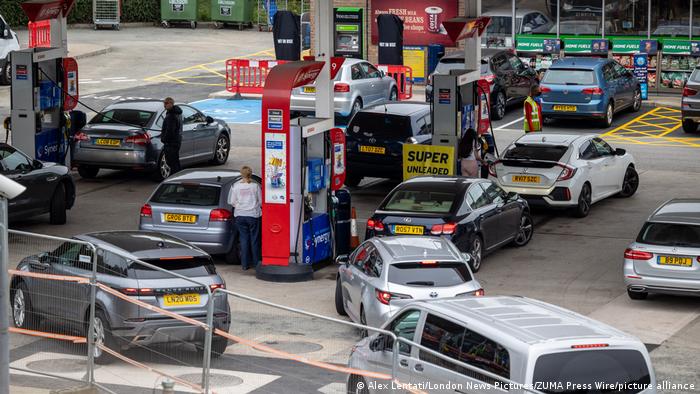 British newspapers said that Downing Street would go back on a previous pledge and offer up to 5,000 short-term visas for drivers of heavy goods vehicles (HGV). The decision was set to come into effect to avoid disruptions during the busy period in the run-up to Christmas.

Shortages of delivery drivers have left some gas stations rationing supplies for consumers. Brexit and the COVID-19 pandemic are considered to be the main cause behind the current situation.

"We're looking at temporary measures to avoid any immediate problems, but any measures we introduce will be very strictly time limited," a spokeswoman for Johnson's Downing Street office said in a statement.

Oil companies have assured that there is no lack in supply, simply a problem of delivery. Despite calls by ministers to avoid panic buying, long queues of motorists were witnessed at filling stations. This led some stations to close as their supplies ran out.

"The public should be reassured there are no shortages," a Downing Street spokeswoman said. "But like countries around the world we are suffering from a temporary COVID-related shortage of drivers needed to move supplies around the country."

Logistics companies had long been requesting measures to resolve the scarcity of drivers, but the UK's Road Haulage Association (RHA) said that the country needed at least 100,000 more drivers to meet the current demand.

The Confederation of British Industry (CBI) said there was "huge relief" at the government's decision to ease restrictions for foreign drivers.

Director general Tony Danker told BBC Breakfast: "We've been calling for it for three months. We could see this problem coming and more problems coming, and so it's a shame the government needed queues at the pumps to move, but move I hope they have and it will help."

The chairman of the British Parliament's transport committee, Huw Merriman, was cautious about the prospects. "We'll have to see if we can attract people for a short time," he said.

The RHA says that the long-term solution is to hire more British drivers, and to offer better pay and conditions. Training and testing has been put on hold during the coronavirus pandemic.