A British doctor has claimed to have prescribed performance-enhancing drugs to dozens of athletes, including Premier League footballers. The UK government has ordered an inquiry into the country's anti-doping agency. 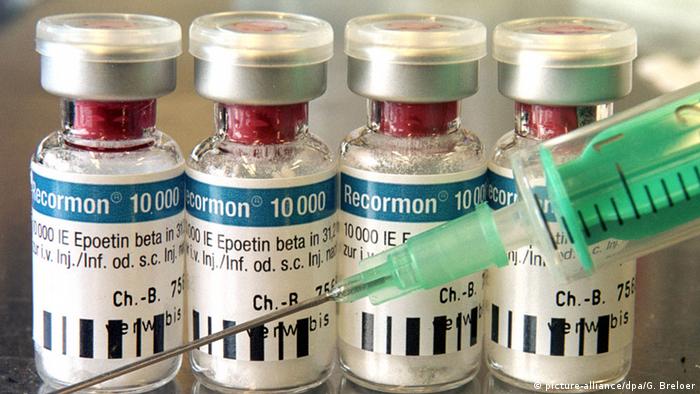 The allegations came in a report published in this Sunday's edition of the "Sunday Times" and a documentary aired by German public broadcaster ARD. Both quoted London-based Dr. Mark Bonar as claiming to have prescribed banned drugs to 150 sports figures.

Although no names were mentioned, Dr. Bonar was quoted as saying that he had prescribed doping substances to players with three Premier League clubs: Arsenal, Chelsea and Leicester City. All three have issued statements denying the allegations.

"Leicester City Football Club is extremely disappointed that The Sunday Times has published unsubstantiated allegations referring to players from clubs including Leicester City when, on its own admission, it has insufficient evidence to support the claims," England's Premier League leaders Leicester said.

"The claims The Sunday Times put to us are false and entirely without foundation," said Chelsea's statement, while Arsenal said it was "extremely disappointed by the publication of these false claims, which are without foundation."

Bonar made these claims during secret recordings made as part of a joint investigation conducted by the British newspaper and German broadcaster WDR, an ARD affiliate. The recordings were made by a person posing on behalf of the media outlets as an aspiring Olympic runner and using a hidden camera.

They also quoted him as saying that he had given a prominent footballer the blood booster EPO, the steroid testosterone and human growth hormone. However, the "Sunday Times" acknowledged it had no independent evidence that Bonar had treated any footballers.

'Independent review' to be conducted

David Kenworthy, the chairman of Britain's UKAD anti-doping agency, said that "an independent review will be conducted into the issues raised by the Sunday Times."

The newspaper also quoted Britain's culture media and sport secretary, John Whittingdale, as saying that he had ordered an inquiry into UKAD as a result of the revelations from the media reports.

"I have asked for there to be an urgent independent investigation into what action was taken when these allegations were first received," he said.

According to the reports, UKAD got its first indication that Bonar was involved in doping back in 2014. They said an athlete who had been suspended for a doping violation had handed the agency documents indicating that he had been prescribed the drugs by Bonar.

However, UKAD chief executive Nicole Sapstead said in a statement that the agency was not able to take any action against Bonar at the time. He was not subject to any sport's governing body, and therefore not under the UKAD's jurisdiction.

"UKAD had no other intelligence to corroborate the sportsman's allegations," Sapstead added.

IOC chief Thomas Bach wants change after a scandal-filled year across the sports world. He hopes his "Olympic Movement" can provide "new answers to new questions." (30.12.2015)

The International Association of Athletics Federations (IAAF) has said it will double its anti-doping budget. The move is part of a 10-point plan by IAAF President Sebastian Coe to "restore trust" in athletics. (06.01.2016)