British PM Theresa May has said it is "deeply disturbing" that two more people have been exposed to the Novichok nerve agent. It still remains unclear how the couple came into contact with the dangerous substance. 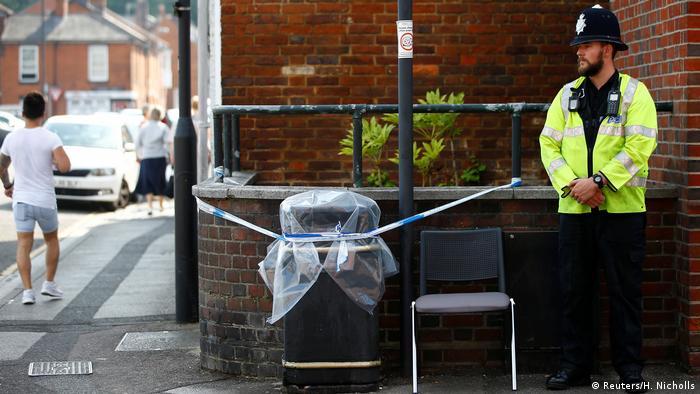 British and Russian ministers traded tense statements on Thursday, after it was revealed that two British citizens fell sick after being exposed to the Novichok nerve agent this week.

Although British officials do not believe the latest case was a deliberate attack, they've called on Moscow to explain the use of the nerve agent that was also used to poison former Russian double agent Sergei Skripal and his daughter Yulia in March in the city of Salisbury.

Couple poisoned after chance encounter: A 45-year-old man and a 44-year-old woman who have not yet been identified by authorities fell unconscious on Saturday in a quiet neighborhood of Amesbury in the county of Wiltshire, just 12 kilometers (8 miles) from Salisbury, where the Skripals were poisoned.

British authorities have restricted access to several areas as they check for traces of the nerve agent, including a park in Salisbury as well as a pharmacy in Amesbury.

What is Novichok? Novichok substances are a series of highly toxic, military-grade nerve agents developed in the Soviet Union in the 1970s and 1980s. They also take a long time to decompose, leading British authorities to believe certain areas in Salisbury may still be contaminated.

The Skripal poisonings: Sergei Skripal, 66, and his daughter Yulia, 33, were found unconscious on a bench in Salisbury in March. Authorities found they had been poisoned with a Novichok nerve agent in the first known chemical weapons attack on European soil since World War II. A diplomatic crisis was sparked after May's government said Russia was responsible for the attack, which led both sides to expel diplomats.