Police in Uganda have raided the headquarters of a key opposition party and detained a presidential contender. Vote counting continues. Ole Tangen in Kampala says the police presence is heavy, the mood tense. 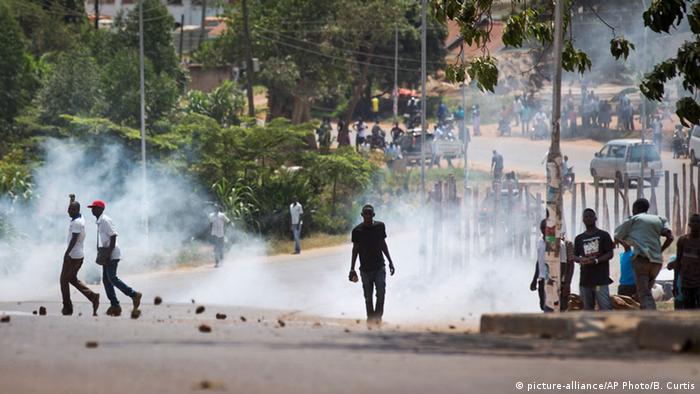 Security officers have raided the headquarters of the opposition Forum for Democratic Change (FDC) just one day after Uganda's elections. FDC presidential challenger Kizza Besigye was detained and placed in the back of a police van.

FDC headquarters are located on Entebbe Road, one of the busiest roads in the country and the main artery connecting the capital to the airport. Security officials subsequently blocked the four-lane road with armored vehicles.

A police official voiced criticism of the way the FDC was handling information it had about Thursday's (18.02.2016) elections.

"We don't stop them from tallying but they are not supposed to announce their results as official results, this is misleading," said Police Head of Human Resource Andrew Felix Kaweesa who was present at FDC headquarters.

Kampala Metropolitan East Regional Police Commander Siraje Bakaleke said Besigye has not been arrested but has been taken to his house in Kasangati, outside of Kampala.

Other high-ranking members of FDC escorted by police from their headquarters include FDC Party President General Mugisha Muntu, Chairman Wasswa Biriggwa, Vice Chairperson Joyce Sebugwawo as well as activist Ingrid Turinawe. Neither the police or FDC has said anything about their destination. 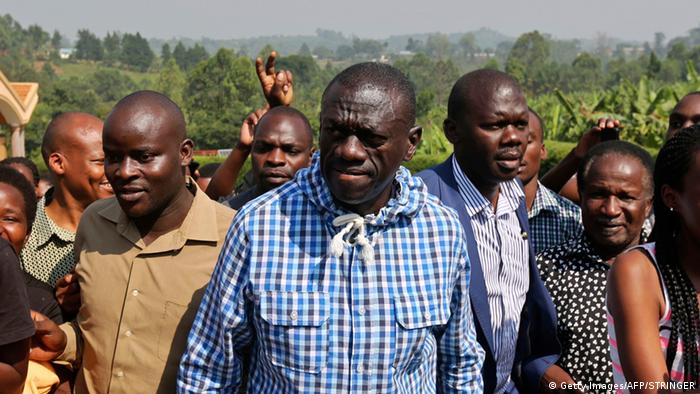 Military and police officers also briefly surrounded the home of independent presidential candidate Amama Mbabazi. His spokesperson said there were no arrests but Mbabazi was being barred from leaving the premises.

There is heavy police deployment at Makerere University. Police spokesperson Fred Enanga said they had received intelligence students intended to riot. Military police have been deployed at Makerere, Wandegeya and Nakulabye towns.

"It's a preventive measure, nothing has happened yet but we are not taking any chances," said Enanga. The mood remains tense in many areas of the city, especially in areas which are opposition strongholds.

Votes are being tallied at the National Tally Center outside of Kampala. Election officials are planning to release the final results of the election late Saturday. According to provisional results on Friday afternoon, incumbent President Yoweri Museveni was ahead of Besigye.

Besigye was still under house arrest late on Friday afternoon.

Alex Gitta in Kampala contributed to this report.