With an election looming, President Museveni is saying he wants to help the countries of East Africa draw closer together under a federation. DW asked analyst Christopher Kayumba how Uganda's neighbors are reacting. 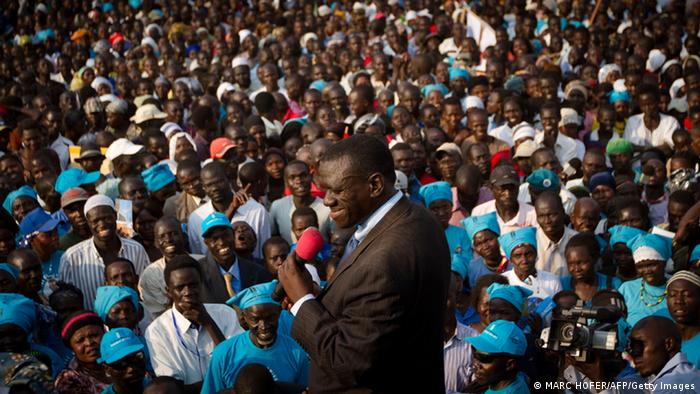 Ugandans head to the polls on February 18 amid a troubling increase in threats against the opposition and the media. President Yoweri Museveni, who has ruled the country for 30 years, has said he wants to extend his term in office in order to help the region push foward with the creation of an East African federation - a proposed union which would see Uganda, Rwanda, Burundi, Tanzania and Kenya forming a single sovereign state. All five countries have expressed interest, but negotiations continue over how such a union would work. Following Museveni's announcement that he would not leave his post as president before the formation of the federation, Uganda's neighboring countries are skeptical. DW spoke to Christopher Kayumba, a Rwandan political commentator, about how the Ugandan election could affect the geopolitics of the region.

DW: How feasible is Museveni's plan to consolidate an East African federation?

Christopher Kayumba: I think for President Museveni to say that he will only leave power after delivering the East African political federation is not feasible. It is something he has been saying since the revival of the organization [the East African Community] in 1999. I don't think the East African Federation can be delivered by any single president in the community. I think he is only looking for an excuse as to why he should be standing for a sixth term in office.

One of the contenders is the former Prime Minister Amama Mbabazi. Recently he said there could be voters coming from outside Uganda, that is, from Tanzania and Rwanda. What do you make of that statement?

It is not possible to verify whether this is true and I don't think that Rwanda and Tanzania can conspire with a single political party in Uganda to come and vote for any of the other candidates.

What impact is this election likely to have in terms of geopolitics in the region?

It will depend on the outcome. If the outcome retains the incumbent, I don't think that geopolitics will change very much. Museveni has been in power for the last 30 years, he is one of the key players in the region, and he is even the mediator in Burundi. Maybe it will give him more time to help in resolving the Burundian conflict. But if the elections are won by the opposition, that would have overwhelming ramifications. It may also shape what will happen in other countries. There are elections coming up in Rwanda and Kenya in 2017. If the opposition wins [in Uganda], that is when you can talk about geopolitical alignment. But the chances of the opposition winning are almost zero.

So the crowds pulled by the leading opposition contender Kizza Besigye won't translate into actual votes?

I am not saying that having very huge crowds does not translate into votes. If the people counting the votes have been put in place by the incumbent, I am not very sure whether even if the incumbent is beaten, the votes will be counted to reflect the wishes of the people. Unless you have an independent electoral commission, you cannot have the opposition be announced as the winner.

We've heard officials from both the ruling party and opposition groups making statements that could tantamount to inciting violence. Isn't this dangerous for the country itself?

There are two elements to it. If you hear what some in the opposition and in the ruling National Resistance Movement [NRM] have said, there is a rhetoric that would indicate that we may have some kind of protest. It is even more dangerous when political parties have what we would call a militia. The opposition has accused the NRM and the police of training a militia called ‘crime preventers.' But Forum for Democratic Change [FDC] has also been accused of having a militia called ‘Power 10'. So there is a possibility of violence after the elections.

That is even made worse by the existence of militias and the police involvement on the side of the 'crime preventers' group. The Inspector General of Uganda's police, Colonel Kale Kaihura, has said that he will not allow the opposition to take power even if they win. President Museveni has said that he cannot give power to 'wolves.' All these indicate that elections may lead to something that might not be good.