The 38-year-old musician-turned-presidential candidate has been freed on bail after being arrested Wednesday for allegedly breaching coronavirus rules. He has emerged as the main rival to veteran leader Yoweri Museveni. 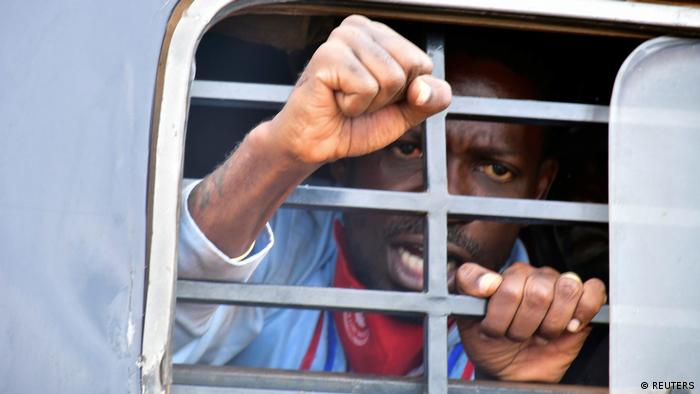 A Ugandan court on Friday charged opposition leader Bobi Wine over an election rally that allegedly flouted COVID-19 rules, then freed him on bail.

The move came after his detention sparked violence in the capital, Kampala, and nearby cities that left 37 dead in what has been  described as the country's worst unrest in a decade.

Wine was charged with "doing an act likely to spread infectious diseases contrary to the penal code and rules of the public health on Covid-19," said judiciary spokesman Solomon Muyita.

Officers arrested the musician-turned-politician, 38, on Wednesday while campaigning in Eastern Uganda.

The Uganda police pathologist and the head of police health services told journalists earlier that 37 bodies had been counted by Thursday morning.

Authorities say more than 300 people have been detained so far. Security Minister Gen. Elly Tumwine warned protesters to bring the violence to an end.

"This was a deliberate and pre-planned move to cause chaos because we have evidence," he said. "But I want to warn those inciting violence that they will reap what they sow."

Tumwine provided no further details about what might happen to those who ignored his warning.

The star singer, whose real name is Robert Kyagulanyi, entered politics as an independent in 2017.

He has emerged as the strongest challenger to veteran leader Yoweri Museveni, who has ruled the East African country of 42 million since 1986.

Human Rights Watch said Wine's arrest was a sign of "growing repression of opposition politicians ahead of Uganda’s national elections scheduled for January 2021."

The NGO called on the Ugandan authorities to release him "immediately and unconditionally and respect the rights of people to peacefully protest his detention."

In a statement on its website, HRW said: "In the last two weeks, the authorities have used COVID-19 regulations as a pretext to violate rights and clamp down on the opposition and the media."

Ugandas will vote on January 14 to elect their next president and lawmakers. Museveni, who is 76, is seeking a sixth term in office.

Hundreds were arrested in the Ugandan capital of Kampala amid deadly clashes between protesters and security forces. The violence started after authorities arrested popular opposition candidate Bobi Wine.