Real Madrid have added the UEFA Super Cup their trophy cabinet with a 2-1 victory over Manchester United in Skopje. Casemiro and Isco scored for the Spanish giants, who held on despite a Romelu Lukaku consolation. 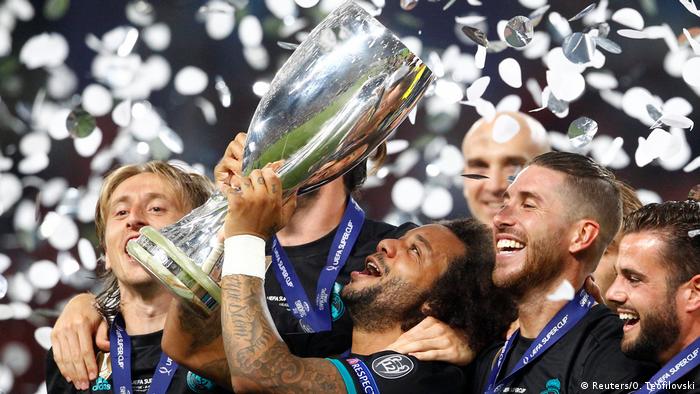 Isco's slick strike early in the second half proved the winner as Real Madrid survived a Manchester United fightback to win the UEFA Super Cup in the Macedonian capital of Skopje on Tuesday.

Casemiro put the reigning European champions in front on 24 minutes in the Balkans and Isco doubled their lead seven minutes into the second half after a one-two with Gareth Bale.

The gulf in class between Madrid, for whom Cristiano Ronaldo appeared as a late substitute, and Europa League winners United that Jose Mourinho had feared was all too evident.

It looked like the Spaniards would go on to win by a wider margin when Bale, a transfer target for Manchester United, could have made it 3-0, but rifled a shot against the bar.

New signing Romelu Lukaku pulled one back just past the hour, marking his competitive debut for United with a goal and sparked an improvement from the Premier League team in the final stages.

But Zinedine Zidane's side claimed the trophy for the second year running and the fourth time overall. It is the eighth time in nine years that a Spanish club has won the Super Cup.

The German coach is set to take charge of the Austrian national team as they target qualification for Euro 2024. Rangnick is currently interim coach at Manchester United, where he will remain in an advisory role.