A Cristiano Ronaldo double saw Real Madrid crowned champions of Europe for the 12th time and become the first team to retain the Champions League. The Portuguese forward scored the first and third in a 4-1 win. 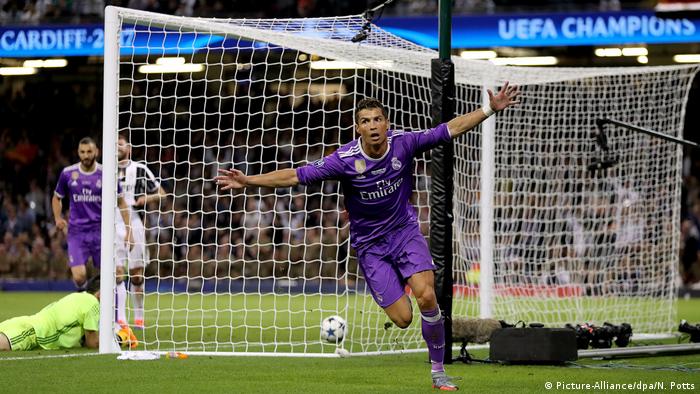 It could only be him. For all the greats of the game on the Cardiff pitch, there were times on Saturday night when the other 21 players felt like extras in the Cristiano Ronaldo story. He's got quite the scriptwriter.

The competition's record goalscorer opened the scoring and added to it later on to extend his lead at the top of the all-time goalscoring list and ensure he finished the match as the most prolific player in the Champions League for the fifth season running.

In between his brace, Juventus threatened Real's grip on a title they regard as their own, thanks to an incredible Mario Mandzukic strike, before Casemiro restored the Spanish side's lead.

An extended - and largely unwanted - performance from the Black Eyed Peas meant the teams were late in kicking off, but the Italians weren't slow to start once the match finally got under way. 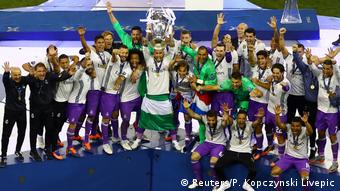 Former Real frontman Gonzalo Higuain was particularly bright early on, forcing Keylor Navas in to two saves in the first five minutes. The Costa Rican dealt with both comfortably and withstood a more severe examination shortly afterwards, when he palmed away Miralem Pjanic's long-range drive.

But this Madrid side is not easily daunted, and recovered from their shaky start with a sustained spell of possession. But the opener was all about one man – and his identity was no surprise.

Ronaldo picked up a ball deep in the Juventus half and drove at the Italian defense in a manner more reminiscent of the hard-running player he was than the high-end poacher he's become. He slipped the ball to Dani Carvajal on his right with body language that ensured the Spaniard knew he expected it back. Carvajal obliged and Ronaldo fired home, with the aid of a telling deflection, for his 11th Champions League goal this term.

The Italians responded almost instantly with a goal more than fit for this grandest of occasions, though this time the identity of its scorer was less obvious. Alex Sandro burst down the left and was picked out by a raking crossfield ball. The Brazilian cushioned a volley inside to Higuain and the striker helped it on to Mario Mandzukic, who – with his back to goal – didn't seem to have much on.

But the former Bayern Munich man wasn't prepared to let Ronaldo grab all the headlines yet again. He took the ball down on his chest before unleashing a spectacular overhead kick from just inside the box that dipped over Navas and restored parity to an open, engaging game.

Fresh impetus after the break

The second half began in cagier fashion than the first, with mistakes likely to have a higher cost with each passing minute. As the clock ticked down, the game began to fit the pattern predicted by so many in the build up, Real probed with the ball while Juve sat deep and soaked up the pressure.

That meant there was space outside the box for Real's midfielders and, after Luka Modric tried his luck, Casemiro took aim from 30 yards out. The defensive midfielder's strike was firm and dipping, and Gianluigi Buffon for once looked his age as it crept inside his left-hand post. 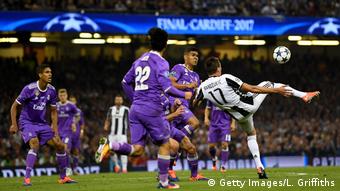 Three minutes later, the great Italian keeper was beaten again, though there was little he could do with Real's third. Madrid broke quickly as Juve adjusted to being behind again and Luka Modric raced on to a ball down the right flank. The Croatian just kept it in play and had the composure to pick out Ronaldo. The Portuguese forward had run beyond the front post but clipped the ball past the keeper with an ease that belied the difficulty of the finish.

Juventus had nothing left and when Juan Cuadrado was dismissed with a few minutes remaining, the Old Lady knew that the fat lady had sung. If they needed any further confirmation, they got it in the last minute of normal time, when Marco Asensio swept home Marcelo's low cross.

For the eighth time in their history, Juventus were left contemplating a loss on the biggest stage of all. For Real, the celebrations were no less emphatic despite the familiarity of a third Champions League victory in the last four years.

The one that got away: Buffon left without fairytale ending

Gianluigi Buffon was the neutral's favorite ahead of the 2017 Champions League final, but the Italian was once again left empty-handed. Was this the 39-year-old's last chance? (04.06.2017)