The Barakah nuclear power station is an attempt to meet the demands of the energy-hungry Gulf state. Abu Dhabi also hopes the project will elevate the country's image as a regional leader in science and technology. 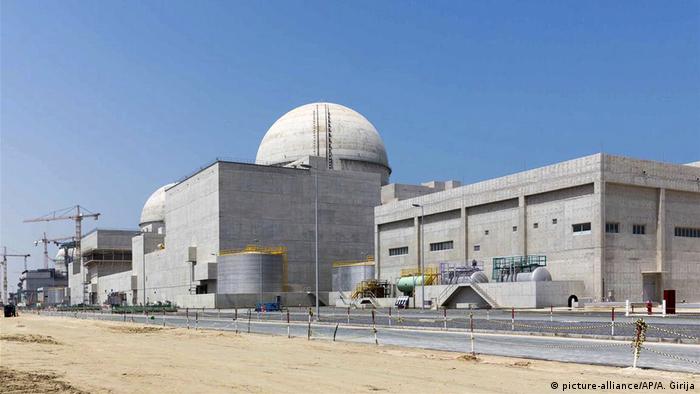 The $22.4 billion (€19 billion) Barakah plant on the Gulf coast west of Abu Dhabi is being developed by a consortium led by the Korea Electric Power Corporation.

On Saturday, the UAE, a federation of seven emirates, pushed the button on the first of the four reactors.

"The aim is to operate four nuclear power plants that will provide a quarter of the country's energy needs in a safe, reliable and emission-free way," he added.

When fully operational, the four reactors will generate 5,600 megawatts – around 25% of the UAE's electricity with zero carbon emissions, according to the Emirates Nuclear Energy Corporation.

Commercial operation is planned for later this year. Unit 1 of the plant would be ready to connect to the UAE's electricity grid, delivering the first megawatts of electricity to homes and businesses in the country.

The energy-hungry Gulf Arab state has a population of 10 million, is home to massive glass skyscrapers and intense air-conditioning systems to beat the desert heat.

"This is part of the UAE's drive to diversify its energy economy, reduce dependence on fossil fuels and project its image as a regional leader in science and technology," one Gulf analyst told French news agency AFP.

The country has substantial oil reserves but is investing billions to generate enough renewable energy to cover half of its needs by 2050.

In 2009, the UAE launched a nuclear program. Abu Dhabi has repeatedly said its nuclear ambitions are for "peaceful purposes" and that it will not be developing a uranium enrichment program or nuclear reprocessing technologies.

The Barakah plant is located near the border with Saudi Arabia on the Emirates coast, separated from Iran by troubled Gulf waters. Iran has its own nuclear power plant on the Gulf coast.

Relations between Iran and the US-backed UAE have deteriorated as Washington pursues a "maximum pressure" policy against Tehran, accusing it of attacking oil tankers in Gulf waters.

UAE officials hope that the Barakah plant will advance the country's status as a regional player with influence extending to Yemen, the Horn of Africa and Libya.

A UAE space probe aboard a Japanese rocket has blasted off to begin its seven-month journey to the Red Planet. The Arab world's first interplanetary mission aims to collect data about the Martian atmosphere and climate.

In the oil-rich Persian Gulf states, foreign workers face high risks, low wages and exploitation. The COVID-19 outbreak is a health crisis they can't afford, and authorities and employers are providing little support.

More than a million foreign workers have been sent packing as Gulf leaders face pressure to hire more locals. Despite the region's reputation for exploitation and rigidity, many foreigners still dream of Arabia.