Tymoshenko refuses to concede Ukrainian defeat | Europe | News and current affairs from around the continent | DW | 11.02.2010

After three days of silence, the Ukrainian prime minister, Yulia Tymoshenko, has spoken out in defiance, refusing to accept the victory of Viktor Yanukovych in the presidential race. 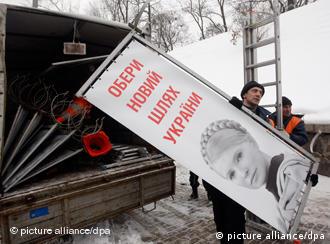 Tymoshenko refuses to accept that she lost the election

Ukrainian Prime Minister Yulia Tymoshenko broke more than three days of silence on Thursday. She attacked her rival for the presidency, Viktor Yanukovych, but refused to admit that she had lost the presidential elections on Sunday.

Speaking ahead of a cabinet meeting, she ignored the election result but accused Yanukovych of deceiving the public. Her party has been claiming widespread fraud in the poll, although international observers have pronounced it free and fair.

Yanukovych has told Tymoshenko to accept the decision of the people and resign as prime minister, allowing him to ask his party to form a government. She can only be removed with a parliamentary vote of no confidence, but would remain as acting prime minister until a new government was appointed.

The country needs a stable new government if it is to gain much-needed help from the International Monetary Fund. The IMF suspended its $16.4 billion program of aid after Ukraine was said to have broken its promises of fiscal restraint.

Meanwhile, the first foreign leaders have begun congratulating Yanukovych, among them the US president Barack Obama, Dmitry Medvedev of Russia, Nicolas Sarkozy of France and Mikheil Saakashvili of Georgia.

Ukraine has a new president but does that automatically mean the country will move in a new direction? Bernd Johann of Deutsche Welle's Ukrainian service examines what the future could hold for Ukraine. (09.02.2010)