Ukraine election winner Yanukovych calls on Tymoshenko to resign | Europe| News and current affairs from around the continent | DW | 10.02.2010 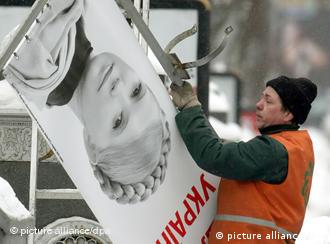 A bitterly fought election process may now move to the courtroom

Recent Ukrainian election winner Viktor Yanukovych has called on his opponent Yulia Tymoshenko to admit defeat and resign her position as prime minister, saying "the nation has spoken for a change in power."

"I want to remind Mrs. Tymoshenko that the basis of democracy is the will of the people," he said. "Democratic leaders always accept the results of the elections."

Thus far Tymoshenko has resisted conceding defeat, and has made no public appearances since Sunday night, when she urged regional representatives to carefully check the vote count and "fight for every vote."

"Voting day displayed a cynical violation of Ukrainian law by the teams of Yanukovych," a Tymoshenko party deputy, Sergiy Sobolev, told parliament. "We will defend in the courts your right, our citizens, to honest and transparent elections."

Legal action could put off the official publication of Sunday's results, which would in turn delay the inauguration of a new president. That typically occurs within 30 days after the results are officially released. 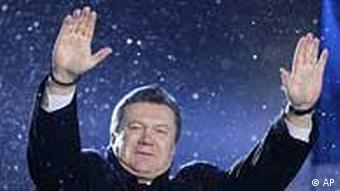 International observers have described the elections as "free and fair." Election monitors from the Organization for Security and Cooperation in Europe (OSCE) said the vote had been an "impressive display" of democracy at work.

EU foreign affairs chief Catherine Ashton also praised the "calm atmosphere" of the vote and said Europe was ready to work with Yanukovych.

"The European Union remains committed to deepening the relationship with Ukraine and supporting it in implementing its reform agenda. It looks forward to working with the new president to this end," Ashton said in a statement.

Prolonged uncertainty about the outcome could hurt Ukraine's ailing economy and scare away investors. The country badly needs to restart talks with the International Monetary Fund on a $16.4-billion (12-billion-euro) bailout package which got bogged down over breaches in fiscal restraint.

With gross domestic product shrinking by 15 percent in 2009, Ukraine was hit worse by the global economic crisis than any other major European economy.

Each candidate had accused the other of trying to rig the vote and analysts had warned that after ballot stations closed late on Sunday, their tussle could shift to court wrangles and even street protests. 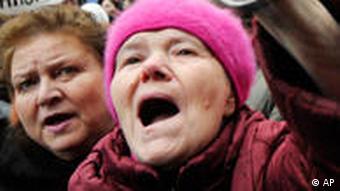 The economic crisis has led to civil unrest in Ukraine

Ukrainians have become largely disillusioned with politics in their country - almost six years after the euphoria of the 2004 Orange Revolution, when the telegenic Tymoshenko helped sweep the pro-Western Viktor Yushchenko into the office of president on promises of reform.

In January's first round, Yushchenko ended up in fifth place, paying the price for slumping living standards, diffidence among investors and squabbles with Tymoshenko.

Compared with past Ukrainian elections, when Yanukoviych was portrayed as the pro-Russian candidate, this time glaring policy differences are few. Both candidates say they want to integrate into Europe, while improving ties with Moscow.

Critics fault Yanukovych, a former mechanic, for not explaining allegations of vote-rigging in 2004. Analysts say his appeal is strong among voters disillusioned by the aftermath of the Orange Revolution.

Ukraine has a new president but does that automatically mean the country will move in a new direction? Bernd Johann of Deutsche Welle's Ukrainian service examines what the future could hold for Ukraine. (09.02.2010)

The outcome of Sunday's Ukrainian run-off vote will likely improve ties between Moscow and Kiev, leaving Poland and the Czech Republic isolated in their fear of Russia. Germany holds the key to easing those concerns. (05.02.2010)

After Sunday's first round, Ukrainians are preparing for a run-off between Viktor Yanukoyvch, the 2004 Orange Revolution's chief target and his rival, Orange heroine and Prime Minister Yulia Tymoshenko. (18.01.2010)

Celebrations in Kiyv as Yanukovych is declared the winner