Margarito Martínez Esquivel was shot dead in front of his home

The photojournalist Margarito Martinez Esquivel, 49, first received threats on Facebook a good month ago. He was falsely accused of running a number of obscure sites spreading gossip about the drug underworld in his hometown Tijuana. He was a courageous, experienced journalist who was familiar with the security situation in Mexico, the world of drug trafficking and the danger of such accusations.

Martinez Esquivel immediately contacted his colleagues on the journalist network #YoSiSiSoyPeriodista, which published a statement on December 13, 2021, saying that he had nothing to do with these sites. They also referred the case to the Mechanism to Protect Human Right Defenders and Journalists, a state agency established in 2012 after pressure from international human rights organizations and journalists as the drugs war escalated.

On January 17, Martinez Esquivel left his home in Tijuana at about midday. He was getting into his car when shots were fired. When his wife Elena and 16-year-old daughter came out onto the street, his body was already riddled with bullets. The popular journalist was known well beyond the borders of Mexico City and his murder has shaken the country. He had spent the past two decades working for big national papers such as the weekly Zeta and La Jornada, as well as international outlets such as the BBC and the Los Angeles Times. 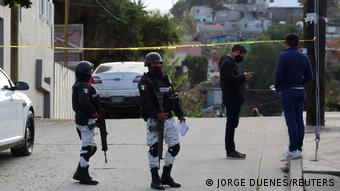 Investigators have blamed a neighborhood dispute

Pedro Cardenas from Articulo 19, an independent organization which campaigns for freedom of expression in Mexico and Central America said that it was "still too early to say anything about the circumstances of the murder and the possible failures of the protective mechanism."

Martinez Esquivel is the second journalist to have been murdered this year. On January 10, Jose Luis Gamboa, who ran the website Inforegio de Veracruz was stabbed fatally - officially, the authorities say that he might have been the victim of a mugging. While Martinez Esquivel might have died as the result of a dispute among neighbors. Investigators are known for spreading such hypotheses in the first hours after a murder - an approach that human rights organizations are increasingly critical of.

"It is a worrying practice because it can steer an investigation in the wrong direction from the start," said Cardenas. "We call on the authorities to apply the standard protocol, which includes investigating the victims' journalistic work as a possible motive for murder." Miguel Mora, the head of the State of Baja California Human Rights Commission, said it was "imperative that the case [of Martinez Esquivel] be expedited because any attack on journalists is an attack on freedom of expression and society's right to information."

According to the Office of the United Nations High Commissioner for Human Rights, 32 journalists have been murdered in Mexico since 2018, when current President Andres Manuel Lopez Obrador (AMLO) took office.  On Tuesday, broadcast journalist Adriana Flores complained at the president's morning briefing about the danger and risks incurred by journalists throughout the country and asked what guarantees the government could provide to protect freedom of the press. 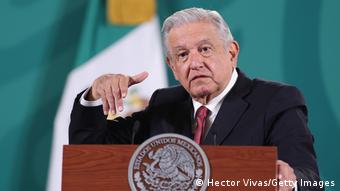 The president did not answer directly. "Our opponents take advantage of everything to attack us but in reality they are not seriously concerned about the loss of life," he said, adding that his government would not tolerate impunity. The issue of protecting journalists in danger would be addressed at a later date in a special report about certain aspects of internal security.

According to UNESCO, Mexico is the country with the second-most journalist deaths after Syria. Over 85% of the murders since 2006 have gone unpunished.