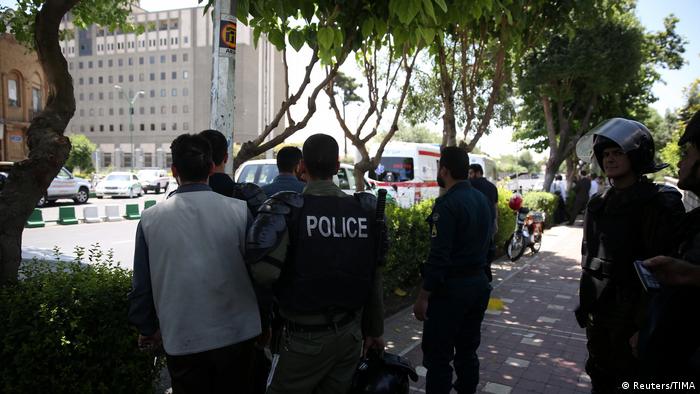 Iranian security forces surround the parliament building during an attack

"This morning two terrorist groups attacked the parliament and Imam Khomeini's shrine ... Members of a third group were arrested before being able to carry out an attack," the ministry said in a statement circulated by state media.

The self-styled "Islamic State" militant group claimed responsibility for the attack, according to terrorism watchdog SITE Intel Group. However, Middle East observers have expressed skepticism over the claim, saying the group may be seeking to capitalize on the attack.

If confirmed, it would mark the Sunni militant group's first known attack in Iran, a Shiite-majority country that has been a major backer of Syrian President Bashar al-Assad and Shiite militia in Iraq battling IS.

Parliament Speaker Ali Larijani said Iran's actions against militants in Syria and Iraq proved they had become an enemy.

"Iran is an active and effective pillar in the fight against terrorists and they want to damage it," he said.

Holly Dagres, Iranian-American political analyst and curator of the weekly newsletter The Iranist, told DW that the attacks "appeared to be very well planned."

"The attackers chose two very significant targets that symbolize the Islamic Republic, the parliament and the Imam Khomeini mausoleum. They were targeting the very core of the Iranian government," Dagres said.

Dagres told DW that while the Islamic State claimed responsibility for the attacks, some observers suspect the involvement of different actors, including an Islamist leftist militant group known as thePeople's Mojahedin Iran (MEK), which has called for the overthrow of the Islamic Republic.

In a written response to DW, a spokesperson for the MEK strongly denied that the group was involved.

"The People's Mojahedin of Iran (PMOI or MEK) denies this claim and any connection with these incidents and condemns efforts to attribute them to the PMOI," Shahin Gobadi said. 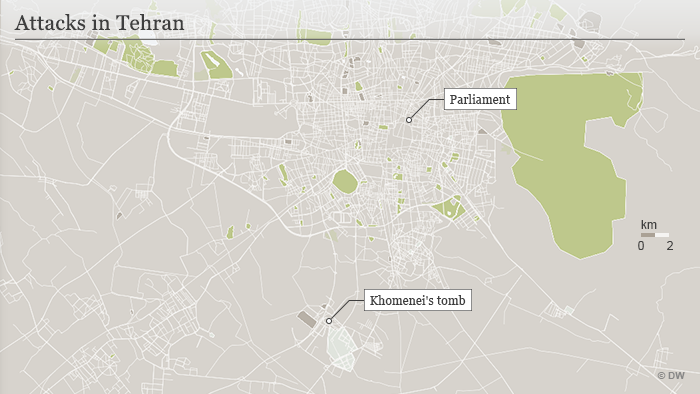 One attack Wednesday targeted the parliament, where several armed assailants stormed the building. At least one of them detonated a suicide vest strapped with explosives within the building, according to local media reports. The other assailants wielded assault rifles.

"A person entered Iranian parliament today and started shooting at the guards. He shot one of the guards in the leg and ran away," the Fars and Mehr news agencies reported in their Telegram messenger feeds.

Press TV and other state-run news outlets reported that a suicide bomber detonated an explosive-laden vest near Khomeini's mausoleum, located in southern Tehran, some 20 kilometers (12 miles) away from the parliament building.

Khomeini is a crucial figure in modern Iranian history. He effectively launched the Islamic Revolution in 1979 that witnessed the founding of an Islamic republic marked by the overthrow of Mohammed Reza Pahlavi, the last Shah of Iran.

During the attacks, authorities placed Tehran on lockdown, warning against using public transport and preventing journalists from reaching the site of Khomeini's tomb.

The high-profile attacks are likely to raise tensions between rivals Iran and Saudi Arabia, who are battling for influence across the region in Syria, Yemen, Lebanon and the Gulf Arab states. It also comes as Gulf Arab states spar with Qatar in part over its relations with Iran, and after US President Donald Trump met with Arab leaders in Saudi Arabia earlier this month urging a united front against extremism and Iran.

Iran's powerful Revolutionary Guards blamed Saudi Arabia and the United States for the attack in a statement run by Iranian media.

"This terrorist attack happened only a week after the meeting between the US president and the [Saudi] backward leaders who support terrorists. The fact that Islamic State has claimed responsibility proves that they were involved in the brutal attack," it said in a statement.

Opinion: Young princes in the Persian Gulf are playing with fire

The EU's top diplomat Federica Mogherini expressed her "condolences to the victims" of the attack, saying her team is following the events "closely."

"I condemn in the strongest terms the attacks in the Iranian parliament building and the tomb of the revolutionary leader Khomeini," Foreign Minister Sigmar Gabriel said in a statement.

France's foreign ministry also issued a statement expressing condolences to the families of the victims, noting that its embassy in Iran was monitoring the situation.

In a surprising statement, the UAE, which has accused Iran of creating instability in the region, condemned the attacks, saying: "Our position on terrorism is very clear … Any terrorist attack in any country, in any capital, directed at innocent people is something that the UAE abhors and the UAE condemns."