Twenty years on, shockwaves of Kuwait invasion are still felt in Middle East | World | Breaking news and perspectives from around the globe | DW | 02.08.2010

Twenty years on, shockwaves of Kuwait invasion are still felt in Middle East

On August 2, 1990, Iraq launched an invasion of Kuwait, setting in motion a long chain of events which have reshaped the Middle East and have changed the dynamic of relations between the western and Arab worlds. 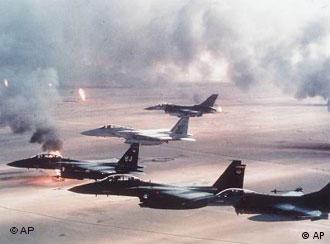 Iraq's invasion of Kuwait and Desert Storm were just the start

In 1990, Iraq was a very different place to the one it is now. The country was under the control of the dictator Saddam Hussein who, at the time, enjoyed good relations with many of the western nations who would later repel his forces from Kuwait, isolate his country through military and legal force, and finally depose him. Iraq was also a respected nation in the region, although one which smaller Arab nations were wary of.

"Iraq was seen as the regional bulwark against the spread of revolutionary political Islam from Iran, which was an important point for the conservative Sunni monarchies of the Arabian Peninsula, who recalled the overspill of Iranian attempts to export its revolution in the immediate aftermath of 1979," Dr. Kristian Ulrichsen, deputy director of the Kuwait Programme at the London School of Economics and Political Science, told Deutsche Welle.

"Although most of the Gulf Cooperation Council states had supported Iraq during its 1980-88 war with Iran - Saudi Arabia was a particularly strong ally - the smaller GCC states were wary of Iraqi power and ambitions in the Gulf."

Kuwait itself was also a close Iraqi ally before the events of August 1990. It was one of Iraq's staunchest supporters in its war with Iran, heavily financing the Iraqi side of the conflict and acting as a military hub when the fighting knocked out strategic cities like Basra. When the war was over, however, relations turned sour. Kuwait wanted its money back. Iraq refused to pay, arguing that its war with Iran had prevented the rise of Tehran's influence over the Arab world.

"The Arabs knew that Saddam had brought ruin and misery to the region, and he was a dangerous bully who might do even more dreadful things, but they had to be pragmatic," Hazhir Teimourian, a Middle East analyst and commentator with the Limehouse Group think-tank, told Deutsche Welle.

"His invasion of Iran had ended in a stalemate but he presented it as a triumph. He expected the whole world, let alone the Arabs, to be grateful to him that he had stopped the tide of Iranian fundamentalist expansionism."

In early 1990, the arguments over the war debt expanded, with Iraq first accusing Kuwait of stealing from its oil supplies and then claiming that Kuwaiti over-production of its own oil was driving down the price of Iraqi crude. The stage was set for military action after a series of emergency meetings between the two Arab neighbors failed to find a solution.

US initially stood aside and took neutral position 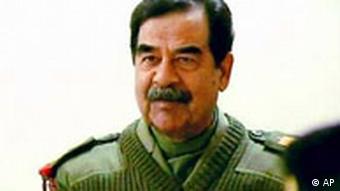 The US withdrew its support for Saddam over the Kuwait invasion

Before Kuwait was over-run and occupied for seven months by the Iraqi military, the United States, in a response which now seems difficult to imagine, announced that Washington "inspired by friendship and not by confrontation, does not have an opinion" on the increasing tensions. "We have no opinion on Arab-Arab conflicts," a White House statement read.

"The United States had provided indirect support to Iraq during the Iran-Iraq war, had turned a blind eye to Saddam Hussein's regime's actions against Iraq's Kurdish population in 1988 and against the bombing of the USS Stark in 1987," Dr. Ulrichsen said.

"The US Ambassador to Iraq, April Glaspie, appeared to adopt a tacitly neutral position toward Iraqi-Kuwait border issues during her meeting with Saddam Hussein on July 25th,1990, which was interpreted by Saddam as giving him an indication that the US would not intervene if Iraq took military action against Kuwait."

Less than three weeks later, after the elite Iraqi Republican Guard backed by Iraqi Special Forces had captured Kuwait City, the country's airports and military airbases, Saddam Hussein abolished the State of Kuwait, announced the creation of the 19th province of Iraq and forced the Kuwaiti Royal Family into exile, installing his own self-appointed prime minister and governor to rule.

Unanimous international condemnation of the invasion followed. Even traditionally close allies such as France and India joined the voices calling for an immediate withdrawal. The Soviet Union and China placed an arms embargo on Iraq while the UN Security Council passed 12 resolutions demanding immediate withdrawal of Iraqi forces from Kuwait. The pressure, however, had no effect.

"There was a lot of admiration for Saddam's daring in the Arab world," said Hazhir Teimourian. "The ordinary Arab on the street hoped he would go on to unite the whole Arab world behind him. The Palestinians loved him in particular and felt sure he would go on to destroy Israel. But the governments felt otherwise, As a result, some Arab countries sent token forces to be part of the coalition to evict him from Kuwait once it became clear that the US would do so anyway. The feared the financial wrath of Saudi Arabia and Kuwait if they didn't."

Two months after an election that produced no outright winner, officials in Iraq this week began a recount of ballots cast in Baghdad as the war-torn nation's fragile security and hopes for stability hung in the balance. (04.05.2010)

Saddam Hussein: Rise and fall of a brutal dictator

Ousted dictator Saddam Hussein, who was hanged on Saturday, brutally crushed any internal challenge to his despotic rule in Iraq for 24 years. (30.12.2006)