The jury has narrowed down the list of nominees for the coveted German Book Prize. The grand-prize winner will be announced on Oct. 8 at the opening of the Frankfurt Book Fair. 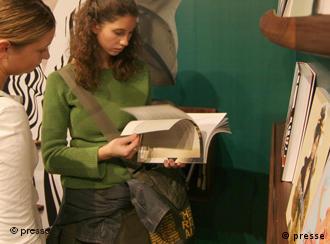 The winner will be announced at the Frankfurt Book Fair

"Without letting ourselves get distracted by prominence or pressure to find something original, we've selected 20 titles that reflect the extraordinary diversity and vitality that German-language literature has to present this fall," said Felicitas von Lovenberg, spokeswoman for this year's German Book Prize jury.

A total of 117 titles, published between Oct. 1, 2006 and Sept. 12, 2007, were reviewed by the seven-member jury over a period of five months. The topics of the novels spanned a wider spectrum than ever, as did the authors' approaches, said von Lovenberg.

Well-established authors and lesser-known writers, along with a few newcomers, made it onto the long list, which was announced on Aug. 15. The short list, consisting of just six titles, will be announced on Sept. 12.

The German Book Prize, an annual award for the best German-language novel, was first presented in 2005 at the Frankfurt Book Fair. Founded by the German Publishers and Booksellers Trade Association, the prize aims to draw attention to German-language literature beyond national borders. Writers from Germany as well as Austria and Switzerland are among the nominees.

Click on the picture gallery below for a look at the long-list nominations.

Thanks to Klaus Baumgart, Cornelia Funke and a handful of other writers, kids read German books worldwide. They've achieved what few of their colleagues ever will: broken into the English-language book market. (11.08.2007)

Are you a book worm in search of a good book? These books by German-language authors have recently been translated into English. Look for them at your favorite bookstore, online vendor or local library. (02.08.2007)