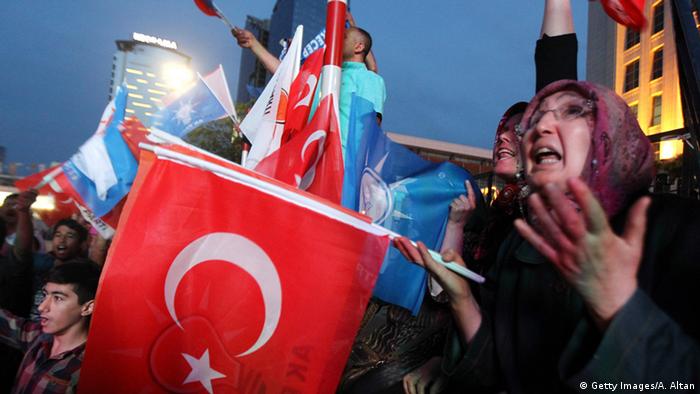 With 99.9 percent of ballots counted, Erdogan's ruling Justice and Development (AKP) party took around 41 percent of Sunday's vote, according to state-run TRT television.

That would give it some 258 seats, 18 below the minimum needed to keep the parliamentary majority.

The result likely puts an end, for now, to Erdogan's hopes of passing constitutional changes that would have greatly boosted the powers of his office. Sunday's election was a quasi referendum on these ambitions; the new powers would have altered Turkey's democratic process and prolonged Erdogan's period as the country's most powerful politician.

If the AKP had won a majority of 330 seats, it would have called a referendum to change the constitution; if it had managed to receive 367 seats, it could have voted in a change without a referendum.

But now the party will have to seek a coalition partner to stay in power. The nationalist MHP party had seemed a likely candidate, but its leader Devlet Bahceli has ruled that out, and called for early elections if other options fail.

The AKP's biggest setback came with the rise of the main pro-Kurdish party, HDP, which is entering parliament for the first time, having cleared the threshold of 10 percent. Preliminary results put its tally at almost 13 percent.

Erdogan, who co-founded the AKP, served as prime minister from 2003 and has been president since 2014.

Many people in Turkey dread a possible two-thirds majority win by the AKP in Sunday's elections. Gays and lesbians are worried that this could lead to even more stigmatization. Daniel Heinrich reports from Istanbul. (07.06.2015)