Hakan Fidan, the head of Turkey's intelligence service has resigned to run in a parliamentary election in June. Fidan is a close ally of Turkish President Recep Tayyip Erdogan. 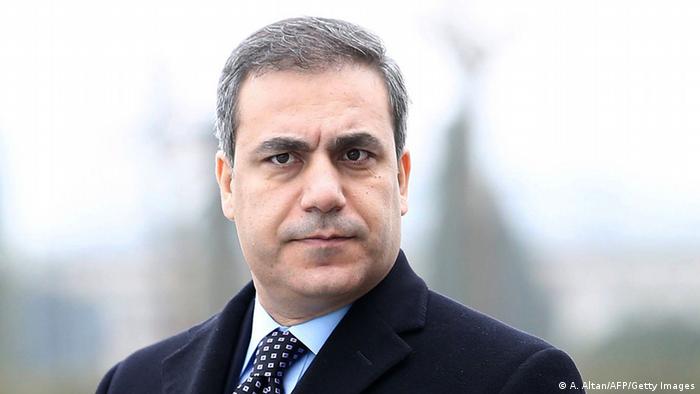 The head of the Turkey's National Intelligence Organization (MIT), also one of the closest confidants of the president, has resigned to stand for election as a lawmaker, the official Anatolia news agency reported on Saturday.

The former spymaster has been widely seen as a potential future foreign minister. "He will take the best of any job in place," Prime Minister Ahmet Davutoglu - himself a former foreign minister - told the Hurriyet newspaper this week. He further described Fidan as "brave and valiant."

His departure comes as Turkey faces a range of intelligence challenges, from its role in the international coalition against "Islamic State" (IS) militants across its southern border in Syria and Iraq to the threat posed to its own security by returning jihadists. Fidan has been a key player in Turkey's policy on the Syria crisis.

The two senior officials said that Muhammed Dervisoglu, undersecretary of public order and security, would be most likely to replace Fidan. The intelligence agency could not immediately be reached for comment.

A key role in the power struggle with Gulen

Erdogan appointed Fidan as head of the MIT five years ago when he was a prime minister. Fidan has played a key role in peace talks with Kurdistan Workers Party (PKK) militants.

He has also been a central figure in the power struggle between Erdogan and Muslim cleric Fethullah Gulen, a former Erdogan ally based in the United States whose network of followers have been acused of undermining Turkey's policing and judicial system. Erdogan blames Gulen for instrumenting the corruption scandal as part of an attempted coup.

Turkey's press have increasingly speculated about the possibility of Fidan becoming an MP in the June legislative elections. The move into politics would give Erdogan another royal ally in the top ranks of the rulling Justice and Development Party (AKP).

Fidan has was seen only occasionally in public and rarely making public comments.

Under Turkish law, state officials wishing to stand in the elections must resign their posts by February 10.