Police have detained 235 people including pro-Kurdish Peoples' Democratic Party (HDP) officials over alleged ties to Kurdish militants. One day prior, a PKK splinter group claimed responsibility for bombings in Istanbul. 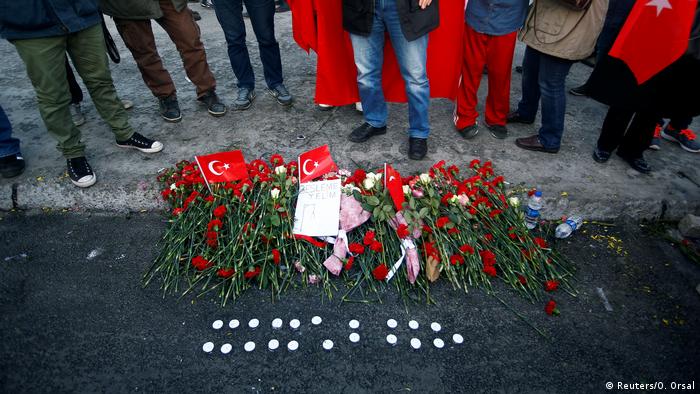 Scores of people suspected of acting on behalf of the Kurdistan Workers' Party (PKK) were detained in nationwide raids, Turkey's Interior Ministry said on Monday.

Some 235 people were taken into custody, the interior ministry said in a statement, saying they were suspected of either membership in outlawed groups like the PKK, or of "spreading terror group propaganda."

Responsibility for bombings in Istanbul has been claimed by the Kurdistan Freedom Hawks (TAK), a splinter group of the Kurdistan Workers Party (PKK). Funerals have begun for the 36 dead, mostly police officers. (11.12.2016)

Ankara has declared a day of mourning after a terror strike outside a soccer stadium on Saturday night in Istanbul killed 38 people and wounded 155. The target was police officers, according to the Interior Ministry. (11.12.2016)

The arrest of Kurdish politicians in Turkey is part of a dual military and political strategy to crush the Kurds. It hasn't worked in the past. (06.11.2016)

In Istanbul, police took 20 officials into custody, including the HDP's provincial head in the city, Aysel Güzel, Turkish authorities said. The party's main offices in the city were also reportedly searched.

Another 17 people involved in the party were detained in Ankara, including the provincial head Ibrahim Binici, Hurrieyet reported. To the south in Adana, a further 25 were taken into custody as part of a large police raid.

The sweeping police raids came after weekend attacks in Istanbul killed 44 people and injured 155, according to the latest figures from the health ministry in Ankara. Most of those killed were police officers.

On Sunday, the Kurdistan Freedom Hawks (TAK) - a radical splinter group of the PKK - claimed responsibility for twin blasts outside a soccer stadium in Istanbul.

Turkish President Recep Tayyip Erdogan said in a published statement that those behind the attack would "pay a heavier price" for Saturday evening's attack.

Turkey has cracked down hard on the HDP both before and especially since a July 15 coup attempt, arresting several national leaders and local officials although the pro-Kurdish party had no obvious connection to the coup plot. The party's members insist they have no ties to the PKK.

Last month, HDP co-leaders Selahattin Demirtas and Figen Yuksekdag were arrested along with eight others and are being held in pre-trial detention.

The PKK is designated a terrorist organization by Turkey, the European Union, and the United States.