Authorities in Istanbul have scattered thousands of protesters from Taksim Square. The flare up in anti-government sentiment followed nearly a week of relative calm. 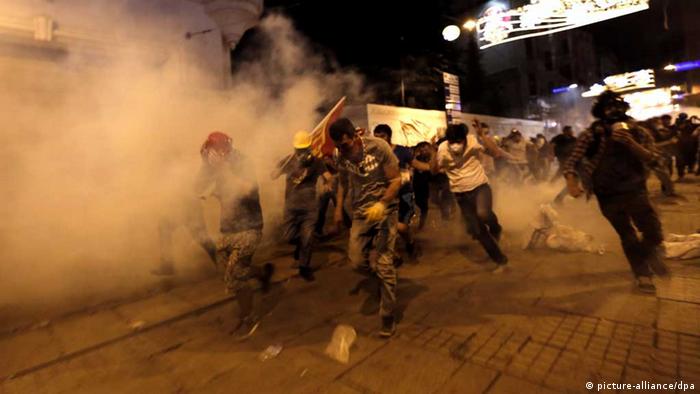 By early Sunday, Istanbul police had driven away thousands of demonstrators from Taksim Square, the site of numerous demonstrations over the past three weeks. They fired rubber bullets, tear gas and water cannon into the massive crowd, forcing many to scatter into nearby streets.

There were no immediate reports of injuries.

The violent dispersal of the Gezi Park protests in Istanbul and Prime Minister Erdogan's threatening rhetoric have scared the people of Turkey. Hardly anyone wants to speak about the recent events. (22.06.2013)

Protesters had gathered on the square to commemorate the four victims of the violence - including one police officer - which has broken out repeatedly since the anti-government demonstrations began.

As some laid down carnations for the deceased, others held aloft banners pledging solidarity and shouted: "Police, don't betray your people."

The unrest coincided with a speech by the premier to government supporters in the Black Sea coastal city of Samsun on Saturday. Prime Minister Erdogan has accused foreign actors of fomenting anti-government sentiment which has spread rapidly across Turkey.

"Who won from these three weeks of protests? The interest rate lobby, Turkey's enemies," Erdogan said to the roughly 10,000 gathered to hear him speak.

"Who lost from these protests? Turkey's economy, even if to a small extent, tourism lost. They overshadowed and stained Turkey's image and international power," he said.

A police crackdown on a peaceful demonstration in Istanbul's Gezi Park in late May sparked the public outcry. What began as an attempt to protect one of Istanbul's few remaining green spaces from an urban development project has swiftly morphed into a national protest against the Turkish government's relentless efforts to quash dissent.

Germany weighs in on Turkey

On Saturday, the German and Turkish foreign ministers met to discuss the effect of recent events in Turkey on the two countries' relationship.

Turkey's EU affairs minister had accused the German chancellor this week of attempting to undermine its bid for EU accession by criticizing Ankara's violent crackdown on protesters. The accusation prompted a meeting between German foreign minister Guido Westerwelle and Turkish counterpart, Ahmet Davutoglu.

Although the diplomatic talks were deemed "constructive and friendly," tens of thousands in the western German city of Cologne took to the streets to publicly criticize Prime Minister Erodgan.

Banners with "Erdogan, the wolf in sheep's clothing" and "Europe knows what's what - a fascist is in charge of Ankara" were seen in the demonstration, which Cologne's police said was "pleasingly peaceful."

The organizers, the Alevi Community in Germany organization, submitted their written demands for what should come next in Turkey, saying the premier should resign to allow for elections. Their document also stated that "no new accession chapter should be written in the Turkish negotiations to enter the EU."