Standing still: a new form of protest in Turkey | Europe| News and current affairs from around the continent | DW | 19.06.2013

Thousands of people are now expressing their anger with Turkish Prime Minister Erdogan by standing silent and motionless in streets and squares - a new tactic that they hope will deter police violence. 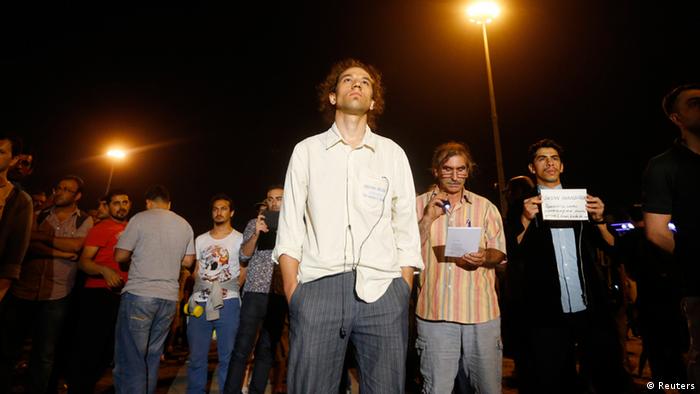 The aggressive police response to anti-government protests in Turkey in recent weeks has left four people dead and many injured. Many more have been arrested. Demonstrating for greater freedom and civil rights, the protesters have marched through the streets of Istanbul, smeared walls with anti-government graffiti, and chanted slogans calling on Prime Minister Recep Tayyip Erdogan to step down.

Istanbul's Gezi Park became the focus of the protest movement. Thousands camped out there, eating, dancing, and singing songs. Police put an end to that last weekend (15.06.2013) when they cleared the park by force.

A new form of resistance

Instead, people all over the country are now finding alternative ways to express their discontent: beating on pots and pans in the evening, whistling, clapping their hands, or switching lights on and off. The police operation may have scattered the chanting, marching crowds - but the demonstrators are turning silence and stillness into a new form of resistance. 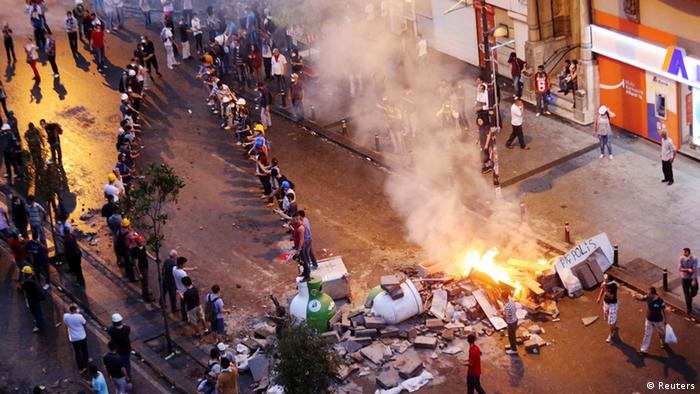 It started on Monday (17.06.) with a man who stood stock-still in Istanbul's Taksim Square, hands in his pockets, staring silently at a picture of Turkey's founder, Mustafa Kemal Atatürk. For five long hours, performance artist Erdem Gündüz simply did not move. Other protesters noticed the solitary figure, and many spontaneously followed his example.

That night, demonstrators stood grouped around Gündüz in peaceful, silent protest. The Turkish police didn't know how to react. Erdogan had banned demonstrations on Taksim Square, and the government had announced that anyone caught protesting there would be treated as a terrorist.

But these people were simply standing, saying nothing, and making no demands. Finally, the police dispersed the silent crowd. Gündüz was detained and interrogated, but eventually they let him go.

Within hours, the image of "duran adam" - Turkish for standing man - and his silent, passive resistance on Istanbul's Taksim Square had gone around the world via Twitter. Protesters in many other Turkish cities followed his example. 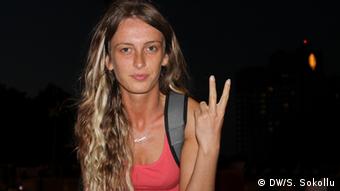 "Sometimes, silence is the best response"

In Istanbul, the silent demonstration has now caught on in other neighborhoods. In Besiktas, a man protested by standing in front of the editorial offices of Sabah, a newspaper close to the government. The protestors are using social networks to organize set times for people to stand still for five minutes. At 8 p.m. on Tuesday (18.06.2013), people all over Turkey simply stopped.

Unfortunately, it has become a crime to react to things that are happening in the country, says Eylem Özkan. The 26-year-old protester told DW that in Gezi Park young people with their own culture and sense of humor had simply been trying to resist government plans to build a shopping center. "That didn't work, so now we have chosen silence. Sometimes, silence is the best response."

"We are smarter and stronger"

In Taksim Square, protesters have fixed their gaze on the Atatürk Cultural Center, which Erdogan wants pulled down. Many are seated; some pray, or meditate. They also stare at the police officers who have cordoned off Gezi Park. Sometimes they stare for hours on end, without batting an eyelid.

"This is the best way to show them that we are smarter and stronger than they are," 26-year-old Gökce Isilsen told DW. "They beat us and push us around, so we have to find smarter ways to demonstrate." 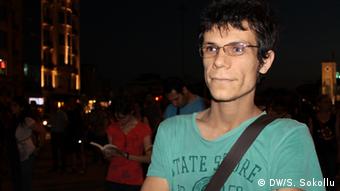 The protests are an outcry, says Hüseyin Günes

Another protester has lit four candles to commemorate the three demonstrators and one policeman who died in the unrest. "If we express ourselves by making noise, we face pain, but if we are quiet, we do not," the man says, squatting beside the candles.

Hüseyin Günes has been part of the protest movement from the start. "A plastic bullet hit my hand; I was targeted with tear gas,and attacked with water cannons," the journalist and sociologist told DW, standing motionless like so many others. The protests, he says, are an outcry - and silence will only make that cry louder.

Prime Minister Recep Tayyip Erdogan's crackdown on protests in Turkey has sparked condemnation in the EU and US. But as the West moves to up its involvement in Syria, it's unlikely to risk a break with Ankara. (18.06.2013)

UN leader Ban Ki-moon has asked Turkey to show "maximum restraint" in its treatment of protesters. Police in Turkey have arrested scores of people they cited as "provocateurs" following raids in several cities. (18.06.2013)