Turkish Foreign Minister Abdullah Gül to Run for President | Europe | News and current affairs from around the continent | DW | 24.04.2007 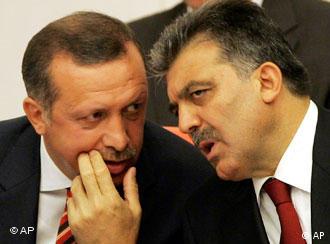 "My brother Abdullah Gül, with whom we established this movement (the governing Justice and Development Party, AKP)... is the person who emerged at the end of our evaluations as the candidate to become Turkey's 11th president," Erdogan told the AKP group in parliament in Ankara.

"The people have seen the services that (Gül) has done for his country," Erdogan also told the AKP.

Erdogan had been widely expected to run for the post, but the prospect sparked harsh objections from secularists. They say the former Islamist, who now describes himself as a conservative democrat, is a divisive figure with no true commitment to the mainly Muslim nation's secular system.

Gul has been foreign minister since 2003 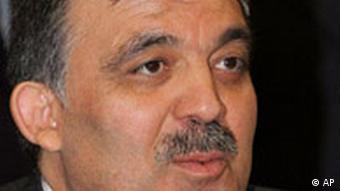 The 56-year-old Gül, who is also a deputy prime minister, is virtually certain to become president thanks to the comfortable majority of 353 seats that the AKP holds in the 550-member parliament, which elects the president for a single, seven-year term.

He is unlikely to get the post in the first two rounds of voting, when a two-thirds majority of 367 is required, but is a shoo-in for the third or fourth round, when a simple majority of 276 suffices.

The first round is scheduled for this Friday, the second for May 2, the third for May 9 and the fourth for May 15.

Gül is a former academic and banker who became a member of parliament in 1991. He and Erdogan helped establish the mildly Islamist AKP, splitting from a group of hardliners.

The AK party was elected to government in 2002 and Gül became prime minister for four months before stepping down once AK party leader Erdogan secured a seat in parliament. Gül has served as foreign minister since March 2003.

German Chancellor Angela Merkel met Turkish Premier Recep Tayyip Erdogan in Hanover and made their peace after the Turkish leader made critical comments about German efforts in regard to Turkey's EU accession. (16.04.2007)