The government has arrested and suspended a massive number of people in connection with last weekend's botched coup. The army, police, judiciary and civil servants are among those continuing to be targeted. 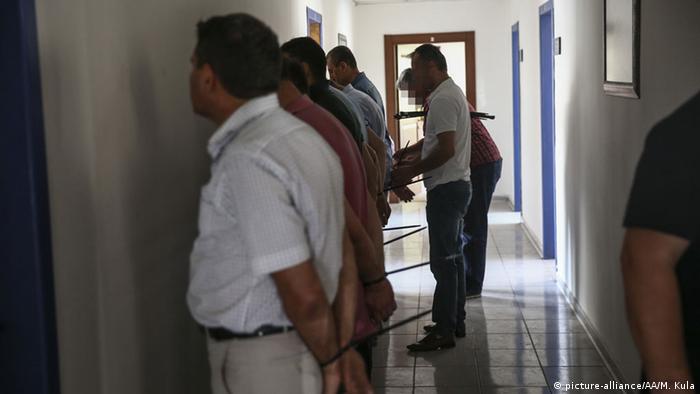 Turkish President Recep Tayyip Erdogan's retribution picked up pace on Monday as the number of people arrested with alleged links to the plot reached 7,543. They included more than 6,000 soldiers, 100 police officers, 755 judges and prosecutors and 650 civilians.

Earlier Monday, a senior security official told the Reuters news agency that 8,000 police officers, including those based in the capital Ankara and the biggest city Istanbul, had been removed from their posts on suspicion of links to last weekend's abortive government takeover.

About 1,500 finance ministry officials were suspended, a ministry official said, and CNN Turk said 30 governors and more than 50 high-ranking civil servants were also dismissed. Annual leave was postponed for more than 3 million civil service staff, while close to 3,000 judges and prosecutors have been suspended. Other reports suggested a massive purge of staff at the Interior Ministry.

A total of 103 generals and admirals have been detained for questioning, according to the state-run Anadolu news agency.

Among those accused was former air force chief General Akin Ozturk, who appeared before a criminal court in Ankara Monday. Ozturk denied being a mastermind of the plot. Anadolu cited him as saying: "I am not the person who planned or led the coup. Who planned it and directed it I do not know."

The commander was later shown on state media in custody, badly battered and bloody, his ear bandaged.

The Incirlik Air Base in southern Turkey was also raided Monday, and seven soldiers were detained, Anadolu reported.

A dozen other suspects were previously held, accused of backing the failed coup, officials said at the weekend.

The facility is used by the US-led coalition to launch air strikes on the so-called "Islamic State" (IS) group in Iraq and Syria. It also houses a major stockpile of nuclear weapons.

The accelerated purge came as several world leaders warned Erdogan against using the opportunity to consolidate his power and continue to stifle dissent, a strategy that has already caused tensions with Europe. EU foreign ministers urged restraint in the wake of the failed coup. 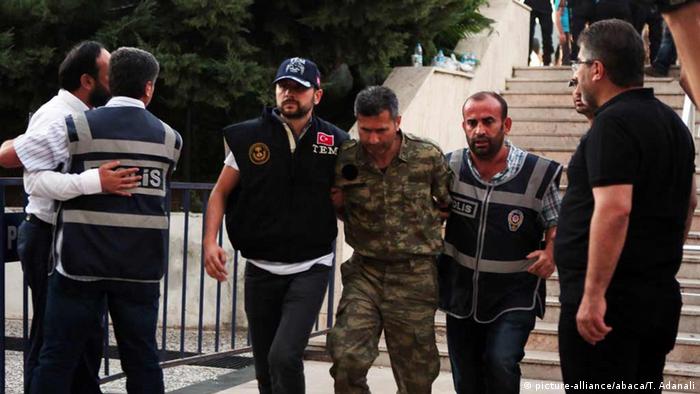 Further arrests were made Monday and thousands fired

"All must be done to avoid further violence, to protect lives and to restore calm," they said in a joint statement, following a meeting Monday in Brussels.

NATO's Secretary-General Jens Stoltenberg joined the call for Turkey's leaders to respect the rule of law when dealing with those responsible for the thwarted plot.

But Turkey's foreign minister, Mevlut Cavusoglu, hit back at criticism of the treatment of suspected coup plotters, saying it amounted to support for the failed coup.

Analysts warned Monday that the purge could have far-reaching consequences for the operations of key state institutions. It could also raise security risks following several terror attacks in Ankara and Istanbul in recent months, and as a military campaign against Kurdish rebels intensifies.

Opinion: The final crisis between the EU and Turkey

The EU foreign minister and her U.S. counterpart, John Kerry, sent a joint message to President Erdogan: We’re watching you! They can’t back that up, fears Barbara Wesel. (18.07.2016)

In light of Friday’s unsuccessful military coup attempt, many Turks fear continued intervention in the press and the judiciary. Discussions on the re-introduction of the death penalty are also troubling. (18.07.2016)