The leader of Turkey's pro-Kurdish HDP has urged peace talks between the government and the militant Kurdistan Workers Party (PKK). Turkish armed forces have launched attacks on both "Islamic State" and PKK bases. 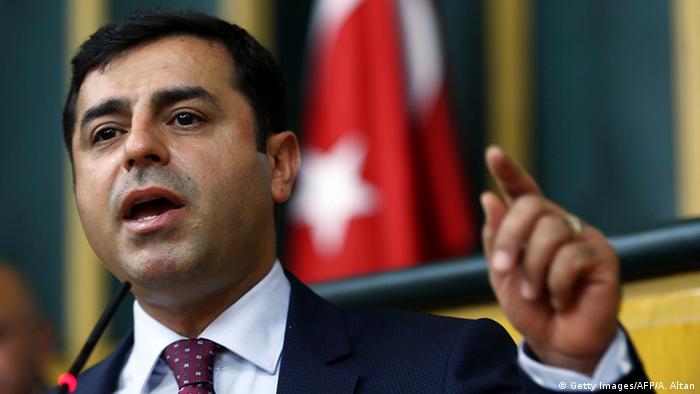 Demirtas said on Saturday that Ankara should revive a peace process started with jailed PKK founder and leader Abdullah Ocalan in 2012.

"Today we call to both sides: the PKK must immediately remove its finger from the trigger and declare it will observe the ceasefire," Demirtas said.

At least five people were killed in clashes between security forces and militants in the Kurdish southeast of the country on Friday.

Turkish armed forces have been bombing both Kurdish bases and targets of the self-proclaimed "Islamic State" (IS) in Syria. Ankara has also allowed the US-led coalition targeting IS to use its air bases.

Demirtas' HDP won 13 percent of the vote in the June election but a government coalition has yet to be formed. Demirtas addressed his comments to Prime Minister Ahmet Davutoglu, saying, "A coalition may be formed or not but peace is urgent. Mr Davutoglu, we are not requesting this from you. You are obliged to do it."

Adding his voice to those expressing concern, German Foreign Minister Frank-Walter Steinmeier said in comments to the "Rheinische Post" on Saturday that it "would be regrettable that Turkey's national peace process should go to the wall because of regional conflicts in the Middle East."

Demirtas has regularly visited PKK leader Ocalan in his Imrali island jail south of Istanbul. Ocalan was arrested in 1999 and sentenced to life imprisonment.

But in an article published by Saturday's "Milliyet" newspaper, Deputy Prime Minister Yalcin Akdogan said the HDP could make no further visits to Ocalan as it had "betrayed" the process. Akdogan said the state would continue to talk with Ocalan.

Akdogan also said that the PKK had to cease operations: "Their withdrawal from Turkey and a complete halt to activities is now a pre-requisite," he said.