A Turkish court has released seven jailed newspaper staff pending the end of their terrorism trial. At least four others will remain behind bars. 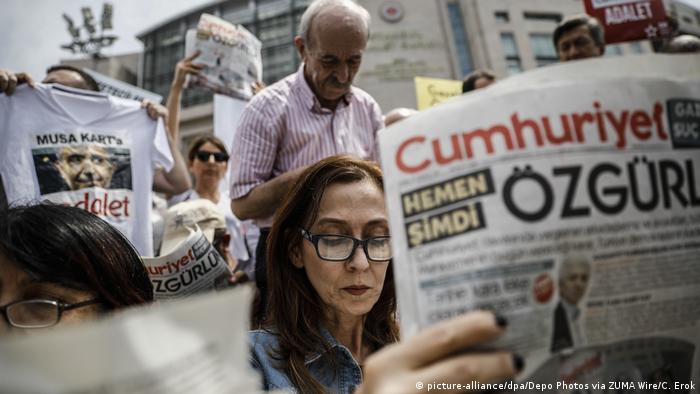 A Turkish court released seven of the 12 jailed staff members of Turkish newspaper Cumhuriyet on Friday, pending the end of their trial.

However, four other employees will remain jailed, including the paper's chief editor and a prominent columnist.

Seventeen journalists, cartoonists and executives are on trial for allegedly aiding terror organizations. The accused say they are the victims of a massive crackdown on opposition voices in Turkey since a failed coup last year.

The released people will have to report to the authorities regularly ahead of the next hearing on September 11.

Atalay was quoted by Cumhuriyet as saying "Do not worry about us, we are standing upright."

Prosecutors said they would file new charges against Sik over an incendiary defense statement he made on Wednesday.

"With this decision today they want to say 'we will bring you to your knees'," Sik was quoted as saying by news agency AFP before being led out. "But they should know - I have only bowed down in front of my mother and father and it shall remain so."

His wife Yonca shouted: "Stay strong, Ahmet, we will resist and get out of this!"

Defense lawyer Alp Selek told the packed courtroom earlier he had been working for nearly 60 years but had "never seen an indictment that invented crimes from scratch."

"I have worked in extraordinary circumstances but this is the first time I have seen such an indictment," he said.

Freelance journalist Elif Ilgaz, who once wrote for the newspaper, told Deutsche Welle's Turkish service that the case full of "tragicomic" accusations.

"Since the first day of the trial, our Cumhuriyet colleagues have disproven the allegations one by one and have shown that this prosecution is nonsense," she said.

"They don't want anyone to raise their voices in Turkey. They have not left alone a single TV station or a single newspaper. The newspaper Cumhuriyet is one of the only newspapers that still raises their voices."

According to the P24 press freedom group, 166 journalists are in jail in Turkey, most of them arrested under the state of emergency.