Turkey threatens ′total rupture′ with France over Armenian genocide bill | Europe | News and current affairs from around the continent | DW | 24.01.2012

Turkey has strongly condemned the French Senate's approval of a bill that would outlaw denying mass killings of Armenians by Ottoman Turks was genocide. Ankara's ambassador in Paris says he's ready to pack his bags. 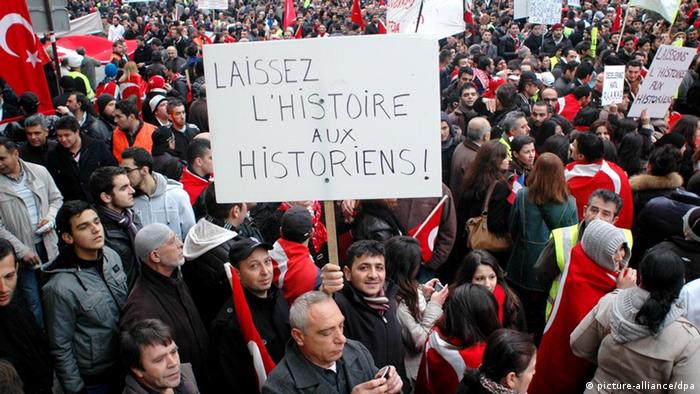 'Leave history to to the historians,' demonstrators say

France's upper house approved a bill late on Monday making it illegal to deny that a massacre of Armenians by Ottoman Turks during World War I was genocide, sparking ire from Turkey and praise from Armenia.

The Senate passed the bill - which allows for a potential one-year prison sentence and a fine of up to 45,000 euros ($57,000) for those who deny that genocide took place - by a vote of 127 to 86. The bill, passed last month by France's lower house, the National Assembly, must now be signed by French President Nicolas Sarkozy before it can become law.

Armenia hailed the French Senate vote as a day "written in gold," while Turkey lamented "a black day in [France's] history."

The bill initially pertained directly to the killing of Armenians by Ottoman Turks from 1915 to 1917, but was later broadened to include all genocides recognized by the French government.

NATO allies Turkey, however, have threatened severe diplomatic fallout if the bill is rubber-stamped by Sarkozy. Ankara has already temporarily suspended relations with Paris.

"Turkey is committed to taking all necessary steps against this unjust disposition, which reduces basic human rights to nothing," Turkey's Foreign Ministry said in a statement. 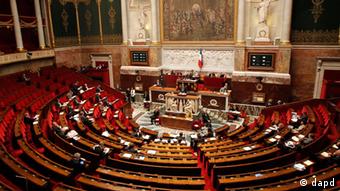 Turkey's ambassador in Paris, Tahsin Burcuoglu, said the vote would lead to a total rupture of relations between the two countries.

"When I say total rupture I include things like I can leave definitively," Burcuoglu told reporters. "You can also expect that now diplomatic relations will be at the level of charges d'affaires, not ambassadors anymore."

The Turkish embassy in Paris said France was "in the process of losing a strategic partner."

"If the law is adopted by the government, the consequences will be permanent," an embassy spokesman said.

The bill will mean that France will officially recognize two genocides - that of the Jews at the hands of the Nazis during the Second World War and the massacre of Armenians in eastern Turkey between 1915 and 1917.

After the lower house vote in December, Turkey suspended all bilateral cooperation with France and temporarily recalled its ambassador from Paris.

Hrant Dink: a journalist who died for his dream

Five years ago Turkish-Armenian journalist Hrant Dink was shot dead in Istanbul. He had had the courage to address a taboo subject in Turkey: the massacre of Armenians in 1915. (17.01.2012)

A week after France drew the ire of Turkey by passing draft legislation making it illegal to deny Armenian genocide in World War I, Israel is debating its official stance on the mass killing by Ottoman Turks. (26.12.2011)

Relations between Armenia and Turkey have been tense for decades. But students from both countries are working to improve ties, looking to Germany's reconciliation with the Jewish people and other groups for guidance. (16.02.2011)