Turkey Steps up New Campaign Against PKK in Northern Iraq | Europe | News and current affairs from around the continent | DW | 06.10.2008

Turkey Steps up New Campaign Against PKK in Northern Iraq 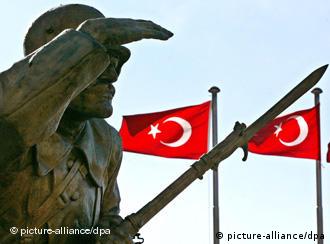 According to a statement released by the Turkish General Staff, the warplanes bombed PKK positions in the mountainous Avasin region of northern Iraq.

"The planes returned safely to base after successfully completing their mission," the statement said. Turkish jets also attacked positions in the same area on Sunday night.

The attack on Friday night on the Aktutun border post in the south-eastern province of Hakkari that left 15 soldiers and 23 PKK separatists dead has shocked Turkey and led to the General Staff on Sunday announcing that it was to relocate five military border posts.

A spokesman for the military said the administration of the Kurdish autonomous area in Iraq had not helped in the fight against the PKK, despite overtures by Iraq's Kurdish President Jalal Talabani.

After the attack Talabani called his Turkish counterpart Abdullah Gul to propose a meeting of high-ranking security experts from both sides, suggesting Iraqi willingness to help Turkey de-escalate the situation.

The Turkish Air Force has conducted a number of airstrikes against PKK targets in northern Iraq since a week-long cross-border incursion into northern Iraq was launched in February.

Ankara blames the separatist group for the deaths of more than 35,000 people since the early 1980s when the PKK began its fight for independence or autonomy for the mainly Kurdish-populated south-east of Turkey. 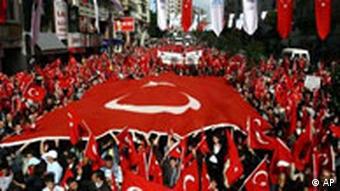 The 15 Turkish soldiers killed in Saturday's attack on an Iraq border post were borne to their graves on Sunday by a crowd of thousands shouting angry slogans against the perpetrators - the outlawed Kurdish Workers Party, or PKK.

The attack, which claimed 38 lives in total, was launched by the guerrilla group, which operates from inside Iraq, after a week of Turkish air force raids on their positions.

Turkish government and military leaders have vowed to escalate the campaign against the PKK.

"We will now conduct our campaign against terrorism even more decisively," said Turkish Prime Minister Recep Tayyip Erdogan, after he broke off his journey to Central Asia in response to the attack.

But Turkey cannot win the war against the PKK by military force alone.

One day before the Aktutun border post attack, the worst PKK assault this year, the Turkish air force had bombarded suspected PKK positions in the Qandil Mountains of Iraq, close to the Iranian border. 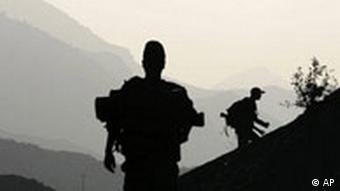 Kurdish troops hit the Turkish post on the Iraq border

At the same time, the attack on the troops stationed at Aktutun was about to be launched, although they didn't know it. According to Turkish media reports, more than 300 PKK fighters assembled for the raid on the border post.

At daybreak on Saturday they opened fire with heavy weapons from Iraq as other fighters moved in on the ground. The battle at Aktutun lasted for five hours. It was the fifth attack on the post since 1992. Turkey hit back with combat helicopters and special forces.

After the attack, Iraqi President Jalal Talabani, himself a Kurd, called his Turkish counterpart Abdullah Gul to propose a meeting of high-ranking security experts from both sides, suggesting Iraqi willingness to help Turkey de-escalate the situation.

However, Turkish daily Millyet commented on Sunday that "long- range weapons cannot be brought into position without those responsible for security in Iraq noticing."

Also under question is the value of US support in informing Turkey of PKK movements within Iraq.

The Turkish parliament is due to vote Monday on whether to allow the army to extend its mandate for operations in northern Iraq for a further year.

The approval of the mandate was not in doubt even before Saturday's attack, as evidently Turkey's operations in northern Iraq had not brought the PKK to its knees.

In February, Turkey launched a ground offensive in Iraq, although US criticism brought it to a rapid end.

US Defense Secretary Robert Gates has suggested the military struggle against the PKK be conducted together with economic and political means. "Only this way can terrorism be stopped," he said.

The PKK is considered by the United States and the European Union to be a terrorist group.