Police have used tear gas to disperse protesters defying a ban by Turkey's government to mark Republic Day. The holiday has become a platform for groups worried that the regime has turned away from secular traditions. 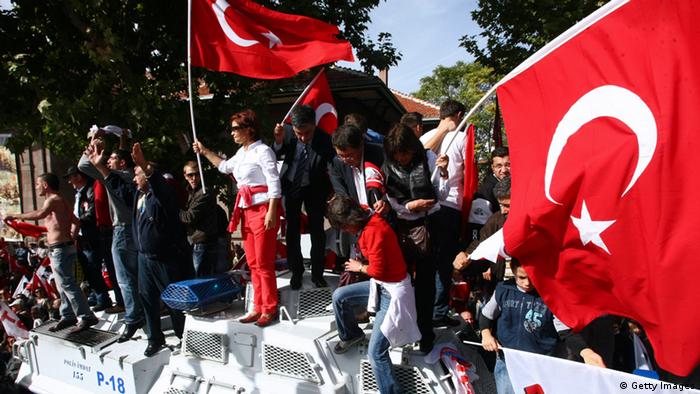 Riot police used tear gas and water cannons in Turkey's capital, Ankara on Monday after the crowd attempted to storm a police barricade in order to march to the mausoleum of Ataturk, the founder of the modern republic.

Witnesses saw drenched girls carried out of the crowd unconscious. Police eventually removed barricades and allowed the crowds to march to the mausoleum. Civil society and opposition groups organized the protest, which began outside the parliament building.

Carrying flags, demonstrators shouted "Fully independent Turkey" and "We are soldiers of Mustafa Kemal," referring to Ataturk. Some also shouted anti-government slogans such as "Turkey is secular and will remain secular", and "We are here despite the AKP" government as they tried to breach the police barricade.

The Ankara governor's office had banned the Republic Day rally, saying that the state's security services have received intelligence that groups might be planning "provocative" action. Some 3,500 police officers were deployed in the area after the government declared the rally illegal.

The opposition Republican People's Party and other government opponents have voiced outrage that celebrating the republic's 89th anniversary should be made into a criminal act.

Although Prime Minister Tayyip Erdogan won a third term in office last year with 50 percent of the vote, many Turks fear that his AK Party has Islamist tendencies. Hundreds of politicians, academics and journalists are in jail on charges of plotting against the government, while more than 300 army officers were convicted last month of conspiring against Erdogan almost a decade ago, and handed long jail terms.

The media watchdog Committee to Protect Journalists announced this month that Turkey has jailed more reporters than Iran, China or Eritrea. Secular Turks also point to increasing restrictions on alcohol and changes to the education system introduced by the AK Party as a sign the country is becoming more Islamic. Erdogan has also forged close ties with Islamist governments in Egypt, Tunisia and elsewhere in the Arab world.

Turkey and Germany: A unique partnership

The expansion of economic ties, as well as growing cooperation in the field of foreign policy, have made Turkey and Germany crucial partners. But this new period also presents new challenges for Berlin. (29.10.2012)