Turkey: Parliament to vote on stripping MPs of immunity | Europe | News and current affairs from around the continent | DW | 16.05.2016

Turkey: Parliament to vote on stripping MPs of immunity

Turkey's parliament is set for a controversial vote on stripping members of their immunity from prosecution. This could become the precursor to the ruling Justice and Development Party calling new elections. 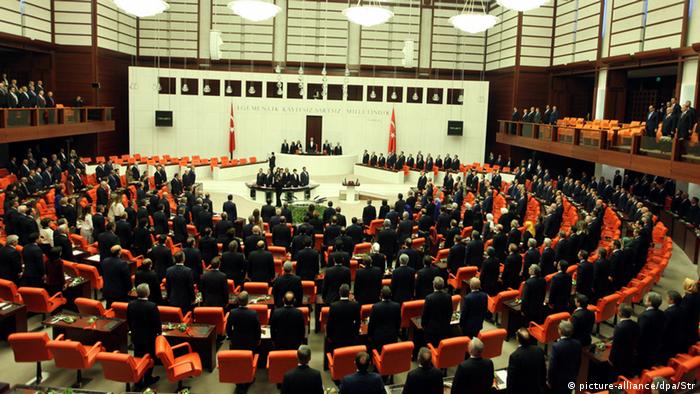 In a vote this week, Turkey's ruling Justice and Development Party (AKP) is hoping to amend the constitution to revoke parliamentarians' immunity from prosecution. Such a change could open the door to a string of court cases against MPs of all stripes - but especially members of the Peoples' Democratic Party (HDP). With rivals out of the way, the path would be clear for the AKP to call Turkey's third general election in two years in the hope of winning enough seats to realize efforts by President Recep Tayyip Erdogan to increase executive powers.

The proposed amendment to remove immunity was passed by the parliamentary constitutional committee earlier this month despite fierce brawls that broke out in the committee during discussions. The fights grew to the point where the pro-Kurdish HDP stormed out of the committee. Parties had not been able to agree upon the principles discussed during the meetings, but the proposed amendment passed quickly after the HDP's exit.

The proposal must receive 367 votes to be approved by parliament. Based purely on seats, the AKP could provide 316 votes and get another 40 from the opposition right-wing Nationalist Movement Party (MHP) and 133 from the center-left Republican People's Party (CHP). Though that would comfortably exceed 367 votes, there have been steady rumors that a number of deputies from both the AKP and the CHP will defy their parties and vote against.

The probability is high that AKP deputies who could themselves face prosecution will vote against revoking immunity. It has also been speculated that a segment of the AKP might vote against - arguing that prosecuting HDP members for alleged support of terrorist groups would be preferable to removing all parliamentarians' immunity from Turkish law.

If the proposal receives between 330 and 367 votes, it could go to a referendum - with Erdogan's decision critical at this point. Erdogan has the authority to take it to referendum or present it to parliament once more. Behind the scenes in Ankara, it has been speculated that Erdogan would prefer a referendum to another vote in parliament. 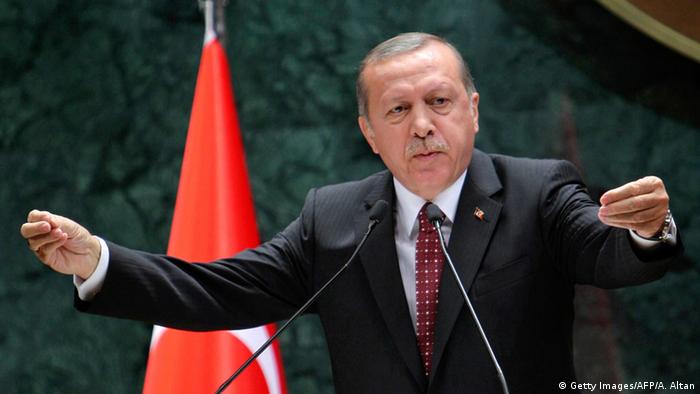 Erdogan's efforts to expand his powers have frightened the opposition

"I am against this amendment and find it to be completely against the constitution," Ergun Ozbudun, a professor of constitutional law at Istanbul Sehir University, told DW, adding that he believed it would nevertheless go through parliament without requiring a referendum.

"We are facing an amendment completely against the principle of equality," Ozbudun said. "Amending the constitution by adding provisional clauses is effectively suspending the constitution. Since the purpose is the removal of immunity, the constitution would need to be changed on a permanent basis. Until the amendment goes into effect, it is being said that cases involving [the stripping of] immunity will be evaluated. This amounts to an amendment being made in a specific period regarding a specific group of people. It is clear that these kinds of amendments are completely against the law."

Ozbudun said the political implications of lifting parliamentary immunity were worrying. "The stripping of immunity via such unlawful amendments will no have no other effect than the further radicalization of the Kurdish political movement," he said, recalling a similar move in 1994, where pro-Kurdish deputies Leyla Zana, Orhan Dogan, Hatip Dicle, Ahmet Turk, Sırrı Sakık and Mahmut Alınak were stripped of their immunity. Zana, Dicle, and Dogan were subsequently imprisoned.

Members of Turkey's ultra-nationalist party have been blocked from holding a congress to oust the party's leader. Events are being closely watched as they could impact President Erdogan's drive to increase his power. (15.05.2016)

Kilicdaroglu: 'The prosecutor is subordinate to Erdogan, not this country'

Kemal Kilicdaroglu, the leader of Turkey's opposition Republican People's Party (CHP), discusses issues including immunity for MPs and media freedom in a DW interview during his trip to Germany. (13.05.2016)

The winds of a possible new election have been blowing around Ankara. Hilal Koylu reports from Ankara about how the prime minister's departure has raised speculation about President Erdogan's machinations. (06.05.2016)

"The primary goal is paving the shortest route toward a presidential system," the journalist Sedat Bozkurt told DW.

"If possible, the AKP will try to take the immunity proposal to a referendum," Bozkurt said. "By the time it goes to a referendum, domestic clashes will have already climbed significantly. The AKP will claim to the public that the HDP is behind these clashes. In such an atmosphere, the public will see no other option apart from voting for the AKP's motion. After gaining major approval from this referendum, the AKP will immediately press the button for a new election. In that situation, both MHP and HDP would fall below the 10 percent threshold. The AKP would then be able to change the constitution on its own, and all barriers toward a presidential system will have been removed."

Bozkurt said the AKP had made little effort to conceal its efforts to target opposition legislators by stripping their immunity: "While the HDP deputies are resisting this decision, the police will be forced to take them into custody. This will be another major blow to Turkish democracy."

Ibrahim Kaboglu, a professor of constitutional law at Marmara University, is among those who think that there will be enough dissenters to keep the proposal from passing in parliament.

"The CHP, for the sole purpose of not being perceived as pro-PKK (Kurdistan Workers' Party) and pro-HDP, came over to the AKP's side," Kaboglu said. "It is contradicting itself. There is no guarantee that immunity will be stripped, because the votes are secret. Many CHP deputies will vote no."

Kaboglu said that if the measure were to pass, the turmoil would not be limited to the parliament. "The stripping of immunity means chaos for Turkey," he said. "The arrest of HDP deputies and the resulting street clashes will deepen social conflict. The CHP, who sided with the AKP even when it found the proposal to be in discordance with the constitution, will pay a heavy price. Turkey is sustaining this process not in the name of democracy but so that HDP deputies can be stripped of their immunity. This process will make every side unhappy, and will continue to damage the country's democracy. It is important that the voting is secret, because that vote reflects not just the conscience of the deputies, but that of society."

This number has risen in recent weeks as tension in politics and on the streets has deepened. According to the parliament's records, there are currently 619 files requesting the stripping of immunity from 136 deputies. This brings the total number of proceedings against the HDP to 366 - and 46 for the AKP. The immunity of 51 CHP deputies, 50 HDP deputies, 27 AKP deputies, and seven MHP deputies has been called into question.