Turkey has 'caught' man who helped UK girls join 'IS'

Turkey has implicated a coalition intelligence agent in the disappearance of three UK teens believed to have joined the "Islamic State." German police have detained an 18-year-old man suspected of fighting for IS. 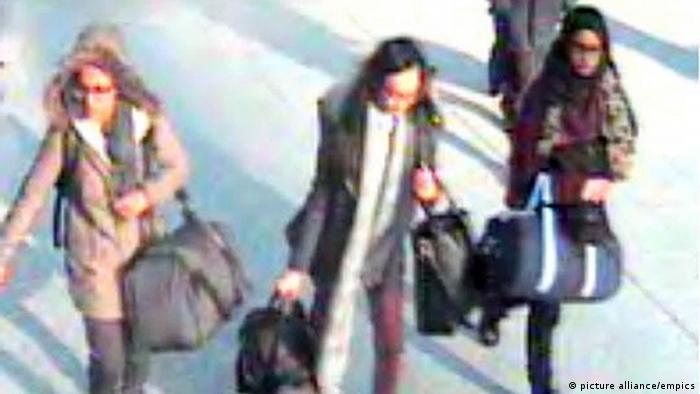 On Turkish television Thursday, Turkey's foreign minister said an official of a coalition country had helped three teenagers flee Britain for Syria. Mevlut Cavusoglu told the A Haber television network that authorities had detained the official, working for the government of one of the countries in the coalition fighting the "Islamic State" (IS), according to Turkey's state-run news agency, Anadolu.

"Do you know who helped those girls?" Cavusoglu told the network on Thursday. "This person was caught. It turned out to be someone who worked in the intelligence services of a country in the coalition."

Cavusoglu did not specify from which of the 60 coalition countries the officer purportedly came, though he ruled out the US, a European nation or Turkey. The revelation appeared aimed at deflecting sustained criticism from other coalition countries that Turkey had failed to stop people from crossing its borders to join IS.

Sixteen-year-old Kadiza Sultana and her 15-year-old friends Shamima Begum and Amira Abase flew to Istanbul in February and took a bus towards the Turkish border with Syria. The disappearance of the girls has alarmed Britain and raised questions about what motivates such young people to go to Syria.

The announcement comes as citizens of several nations have taken sides in Syria. Officials in Frankfurt arrested a man, who grew up in the state of Hesse, on suspicion of leaving the country for Syria alongside three others in October. Officials suspect the four men of having driven a car via Turkey to join IS. An attempt to leave Syria four months later resulted in Turkish border authorities detaining the man and deporting him to his native Germany.

Another German family has received their daughter's body in Turkey after she died in Syria fighting against IS, according to reports on Thursday. In a statement, the radical Turkish-Kurdish Marxist Leninist Communist Party announced that the 19-year-old, Ivana Hoffmann, had fought as one of its members under the nom-de-guerre of Avasin Tekosin Gunes.

French officials launched a formal investigation into an IS video that purports to show the execution of an Arab Israeli. Sabri Essid, 31, has links to Mohamed Merah, who killed seven people in France in 2012.

The top US general in South America says about 100 potential fighters have left the region to join IS and similar groups in Syria. General John Kelly says that those recruits could potentially enter the United States through its southern border upon their return.

Over the weekend, Australia detained two teenage brothers suspected of trying to leave to join IS. In late February and early March, Spain reported a string of arrests of IS sympathizers. Aside from the missing teenagers, perhaps the most famus Brit in Syria is the man nicknamed "Jihadi John" by some, suspected of being IS's executioner in the high-profile beheadings of journalists and aid workers.