Turkey: Family of Gezi protest victim struggles for justice | Europe | News and current affairs from around the continent | DW | 16.06.2016

Berkin Elvan was hit in the head with a tear gas canister by a police officer during the Gezi Park protests in Istanbul three years ago. His father told DW about the family#s ongoing struggle for justice. 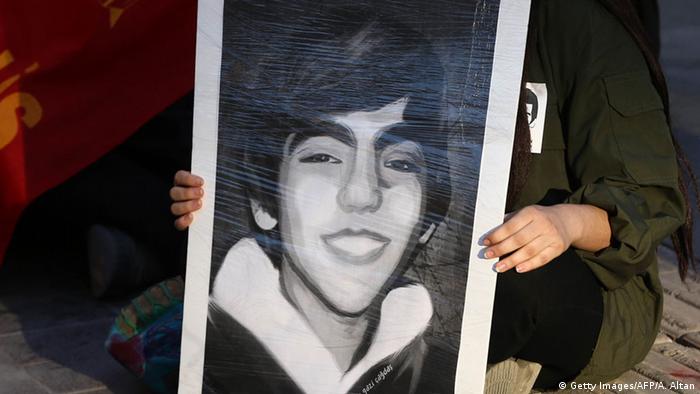 In spring 2013, demonstrators protested peacefully against the Turkish government's decision to cut down trees in the park. These protests turned into nationwide demonstrations against the ruling AKP. Berkin Elvan became one of the symbols of the Gezi Park protests when he died on March 11, 2014, at the age of 15, after having been in a coma for 269 days.

Since then his family has takent the police officers in question to court. Berkin's father Sami Elvan told DW about the struggle for justice.

DW: It has been more than two years since Berkin passed away. As a family, what are you feeling?

Sami Elvan: As a family we feel just like we did on the first day. The pain has not gone away at all. When you add lawlessness on top of it all, we are facing even more difficulties. But we are continuing our struggles in the legal realm. Life goes on for us.

There haven't been any real developments in your trial against the police officers. Your lawyer has said the "investigation is within the grip of impunity and the statute of limitations." What are your thoughts on this subject?

We as a family followed the court cases on the Gezi events. What we are seeing is that courts are handing down verdicts that are completely on the side of the government. The shooters are being acquitted without punishment. At the same time, people are locked up for writing the smallest sentences that [the government] regards as insults, just in the name of intimidation.

I don’t think those who shot our child will be punished during this government’s tenure. The current president [Recep Tayyip Erdogan] who was prime minister at the time of the Gezi protests said: "I gave the order, and my police went down in history."

And we are saying: Those who gave the command need to be put on trial. We will not let this go, we have no other option. If not today, then tomorrow - we will continue our legal struggle until the end.

Berkin was the youngest of those killed in the Gezi protests. His tragic death prompted reactions in broad segments of society. Do you still feel the same support?

We are not alone, I know this for sure. We are working together with the Gezi families and with those who lost relatives due to the violence in southeastern Turkey or ISIS bomb attacks. In the future, we will launch a legal struggle together. This is not just Berkin's struggle, it's everyone's struggle, the struggle of all children in Turkey. I hope we will be successful.

Have you thought of going to the European Court of Human Rights?

Of course, but our legal process in Turkey has not come to an end. We know that an efficient investigation is not being conducted here. Our lawyers were going to apply to the Constitutional Court. There are small developments in the case, but despite that, what is happening is clear. The case is deliberately being dragged out because of pressure from the government. I hope our legal struggle will come to fruition as soon as possible, not just in our names, but in the name of all of Turkey.

In your opinion, what wis your son's legacy?

When Berkin was brought to the hospital after being hit, his heart had stopped. Following the doctors' efforts, he came back to life 52 minutes later. He fought for his life for 269 days.

I believe his message for Turkey was this: "Here with my lifeless body, I'm trying to give you strength. Pull yourself together."

I hope peace, brotherhood and serenity will reach our country, and that it becomes a place where no one harms another and everyone lives freely.

We don't want any children to be murdered.