Turkish officials have stopped a group of pro-Kurdish members of parliament from entering the town of Cizre. Lawmakers claim some 21 civilians have been killed in a government military operation there. 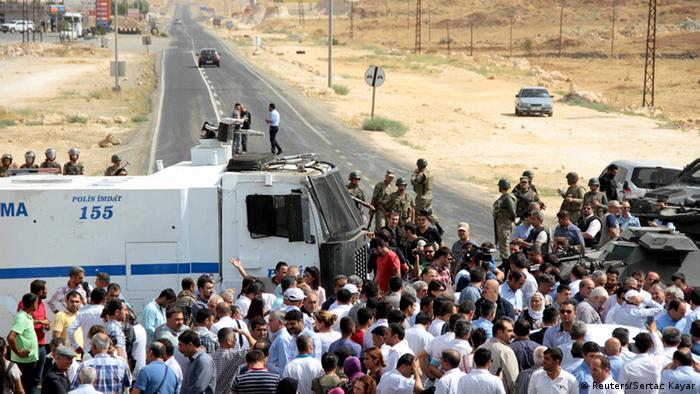 Turkish security forces on Thursday prevented the delegation from the People's Democratic Party (HDP) from entering the southeastern city of Cizre, claiming that the measure was for the politicians' own protection.

Members of the party, the largest that represents Turkey's Kurdish population, had planned to march through Cizre to demand the end to a curfew and highlight the plight of the town's residents.

Ankara has launched a military operation in the town, which Interior Minister Selami Altinok claimed on Thursday had killed more than 30 Kurdish militants and one civilian. Altinok said the curfew on the town, which has already been in place for seven days, would remain in place for the time being. "As soon as our activities are completed, we intend to lift the curfew," he said.

'Held hostage by the state'

However, the HDP claims 21 civilians, including children, have been killed in the operation - eight of them in the past 24 hours.

"It is impossible to go out and buy bread, the water supply is failing and there is no electricity," the HDP quoted party co-chairman Selahattin Demirtas as saying while on the road to the city, which he described as "Turkey's Kobane."

"In Cizre, 120,000 people have been held hostage by the state for a week," Demirtas added.

The group had begun a 90-kilometer (55-mile) trek to Cizre, after its vehicle convoy was stopped by security forces outside the town of Midyat. Delegates staged a brief sit-down protest before returning to a nearby town.

Demirtas warned Thursday that the country was "increasingly drifting into a civil war" as the government pursues a major military operation against the Kurdistan Worker's Party (PKK) and with his party subject to nationalist harassment.

Addressing a press conference in Ankara, President Recep Tayyip Erdogan hit back, saying Demirtas was "mad" to talk of civil war. "If you side with terrorism you will have to suffer the consequences," said Erdogan, warning HDP leaders that they had to "choose between democracy and terrorism."

The HDP says its offices have come under repeated attack from nationalists in recent days, with its headquarters in Ankara suffering severe fire damage.

As fighting flares, political parties and a major newspaper are being targeted with attacks in Turkey. Elections loom, but DW's Seda Serdar says no party can benefit from reopening old wounds. (09.09.2015)

Turkish nationalists have attacked several offices of the pro-Kurdish People's Democratic Party, including its headquarters in Ankara. The attacks follow the killing of 31 members of Turkey's security forces. (09.09.2015)