Turkey and Armenia agree on reconciliation roadmap | Europe | News and current affairs from around the continent | DW | 23.04.2009

Turkey and Armenia have reached an agreement on a comprehensive framework to normalize relations. Deutsche Welle correspondent Dorian Jones reports that the process carries some risk for the Turkish government. 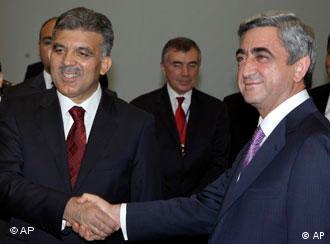 The Turkish minister for EU affairs, Egemen Bagis, said Thursday the process, which is taking place under Swiss supervision, aimed to bring about a fundamental change in bilateral relations between the two countries.

"Better relations, more neighborly relations, more trade, more opportunities and cooperation and peace - I see a light at the end of the tunnel, that peace is possible," he said.

A senior Western diplomat, who spoke on condition of anonymity, told Reuters news agency that the deal had not yet been signed but that Turkey and Armenia had agreed on diplomatic ties, opening the border and establishing commissions to address historical disputes.

"All the documents have been agreed in principle but it's from the signing that the clock starts ticking," the diplomat said. "It is a finite period that is not very long. We are talking about weeks or months." 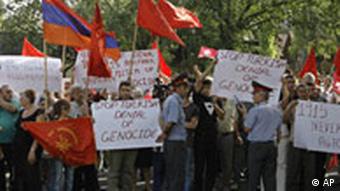 Some Armenian groups have long opposed reconciliation with Turkey

In Armenia, several thousand protesters, mainly supporters of a nationalist junior partner in the government, burned Turkish flags and condemned the efforts at normalizing relations.

At the heart of ongoing tensions between the countries are accusations by Armenia that Turkey was directly responsible for what it calls the genocide of 1.5 million Armenians in 1915 during World War I, a charge strongly denied by Ankara

Turkey officially admits that as many as 600,000 Armenians died during the war and deportation from eastern Anatolia, but it insists the deaths must be seen in the context of an Armenian uprising at a time when Armenians were siding with invading Russian troops

Earlier this week, Ankara recalled its ambassador from Canada after the Canadian prime minister supported the genocide charge. 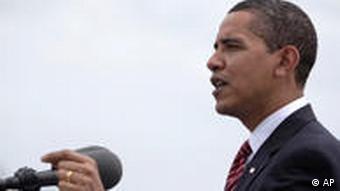 Ankara now fears US president Barack Obama will do the same. During his presidential campaign Obama said he would recognize the genocide if elected. But Yasemin Congar, deputy editor of the Turkish daily Taraf, said Obama may now hold back as a result of the new rapprochement efforts.

"Washington wants to see Turkey open its border with Armenia," she said. "They want to see Ankara and Yerevan normalize diplomatic relations and there is a movement to that end.

"I think Obama wants to give the message to Ankara that if this process goes on it might even stop him from saying the 'G' word, the genocide word in Washington."

During his visit to Turkey earlier this month Obama avoided using the so-called "G" word. Instead he praised the Turkish and Armenian rapprochement efforts. 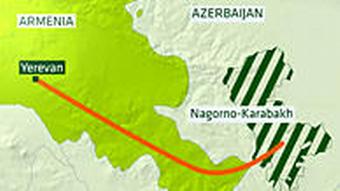 The timing of Turkey's announcement of its agreement with Armenia is being seen as no coincidence. It comes just one day before Armenians around the world remember those killed in 1915. Traditionally, US presidents deliver a speech to mark the event.

US-based Armenian groups have been lobbying Obama intensively to use his expected speech to recognize the genocide. That is now seen as unlikely in light of the new rapprochement efforts. Obama is also aware that a reference to genocide would seriously damage US-Turkey relations.

The Turkish government is paying a heavy domestic political price for its rapprochement efforts, since Turkey's close relationship to Armenia's rival, Azerbaijan, is seen to be at risk.

Sixteen years ago, Armenia occupied nearly 20 percent of Azerbaijan following a war over the disputed enclave of Nagorno-Karabakh. Turkey imposed a trade embargo against Armenia in support of its ally.

"All Turkish press, all political opposition, is using the Azerbaijani issue against the government. I think the government finds itself in a very difficult position," said political scientist Nuray Mert.

Such pressure is already having an effect, with the Turkish prime minister now linking the ending of the embargo to the withdrawal of Armenian forces from Azerbaijan. That is seen as unlikely anytime soon.

Turkish news reports have said Azerbaijan is disturbed by the reconciliation efforts, which could lead to the reopening of the Turkish-Armenian border.

But with Ankara facing increasing pressure from both the US and the EU to end the embargo, the Turkish government now finds itself between a rock and a hard place.

On a visit to Turkey, US President Barack Obama worked to mend fences with an important NATO ally. Praising Ankara's contributions to global stability, Obama also sought to ease Armenia and Turkey toward reconciliation. (06.04.2009)

President Barack Obama has said that the US "is not at war with Islam." He also backed Ankara's EU aspirations and called on the country to patch up relations with Armenia. (06.04.2009)