More than a dozen Tunisian soldiers have been killed in an attack by suspected Islamist militants on the Algerian border. The army has been trying to flush out jihadist fighters in the region. 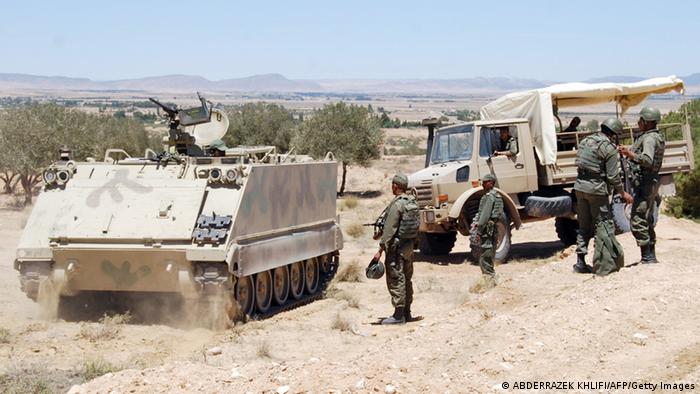 At least 14 Tunisian soldiers have been killed in two simultaneous attacks by suspected jihadists in the eastern mountains on the border to Algeria, the country's defense ministry said on Thursday, revising upwards an earlier death toll of four.

Wednesday's attacks on checkpoints in the remote Chaambi mountains, which also wounded 20 other troops, were the deadliest yet on Tunisia's armed forces, since it began trying to put down an Islamist insurgency. It broke out after a 2011 popular revolt ended the decades-long rule of autocratic former President Zine El Abidine Ben Ali.

Since late 2012, thousands of soldiers have been deployed to the Mount Chaambi and Kef regions to try and control groups of militants thought to be associated with Al Qaeda in the Islamic Mahgreb, or AQIM.

AQIM last month claimed responsibility for the first time for recent attacks in Tunisia, including one on May 27 on the home of the interior minister that left four security guards dead.

On July 29 last year, militants killed eight soldiers, also in the Mount Chaambi region, in an attack that came just days after the assassination of opposition politician Mohamed Brahmi in the capital, Tunis, sparked a political crisis.