Tunisia has been largely sealed off to the outside world, with all flights into and out of the country cancelled. The main labor union had called a general strike in response to the killing of politician Mohammed Brahmi. 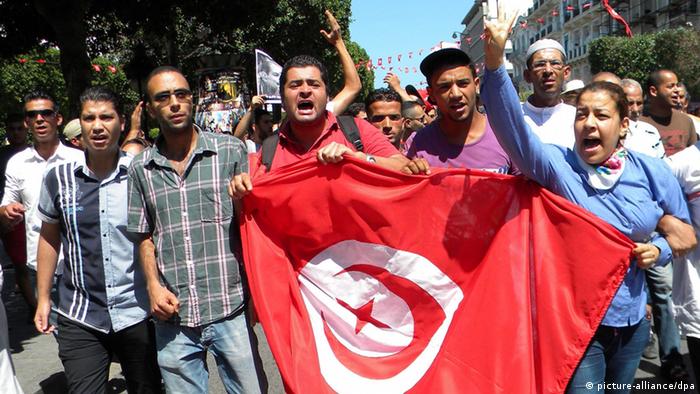 Tunisia observed an official day of national mourning on Friday, in response to the deadly shooting of secular politician Mohammed Brahmi, with shops and banks closed in anticipation of potentially violent protests.

Brahmi was shot dead on Thursday outside of his home near the capital, Tunis, by unidentified gunmen on a motorbike. The 58-year-old was the second leading member of the leftist Popular Front to be shot dead this year.

In February, Chokri Belaid was gunned down outside of his home, sparking protests that led to resignation of the prime minister. Interior Minister Lofti Ben Jeddou told reporters Friday that Brahmi was killed by the same gun used to assassinate Belaid.

The country's main trade union body, the General Union of Tunisian Labor (UGTT), had called a general strike for Friday to protest against "terrorism, violence and murders." According to Reuters news agency, protesters assembled outside of UGTT headquarters in Tunis on Friday, preparing to march down the city's main boulevard as riot police deployed.

UGTT Deputy Secretary-General Sami Tahri said that all sectors of the country were observing the strike, including banks, health services and most public transport. The UGTT claims to have 500,000 members.

Thousands of protesters had already taken to the streets on Thursday in Tunis and Sidi Bouzid, the birth place of the Arab Spring. Demonstrators set fire to offices of the incumbent Islamist Ennahda party in Sidi Bouzid, while riot police fired tear gas at protesters outside of the Interior Ministry in Tunis.

Brahmi's 19-year-old daughter, Balkis Brahmi, told the AFP news agency that she saw two men dressed in black who fled the murder scene on a scooter.

"At around midday, we heard gunfire and my father crying with pain," she said. "We rushed out - my brother, mother and I - to find his body riddled with bullets at the wheel of his car parked in front of the house."

A state autopsy found that he had been shot 14 times. The slain secular politician's sister, Chhiba Brahmi, accused the governing Ennahda party for the murder. "I accuse Ennahda," Brahmi told AFP. "It was them who killed him."

Ennahda chief Rachid Ghannouchi called Brahmi's killing "a catastrophe for Tunisia," saying that "those behind this crime want to lead the country towards civil war and disrupt the democratic transition."

Tunisian President Moncef Marzouki called the national day of mourning Friday and has asked the army to arrange a state funeral for Brahmi. The slain politician's family postponed his funeral until Saturday, to avoid exacerbating tensions.

Ennahda accuses radical Salafists of being behind the assassinations of both Belaid and Brahmi.

Events in Egypt cause tension in Tunisia

Tunisians are regarding events in Egypt with a mixture of fear and admiration. The government is afraid that it could come under pressure too, while the opposition has been lifted. (07.07.2013)

As Tunisia’s president continues on his autocratic path while the economy is on its knees, can international aid return the country to a democratic track?