Tsipras′ strategy gives Greeks a voice | Europe| News and current affairs from around the continent | DW | 09.02.2015

Prime Minister Alexis Tsipras' uncompromising stance has taken Greece into uncharted territory. But many Greeks are happy that someone is finally standing up to the eurozone. Joanna Kakissis reports from Athens. 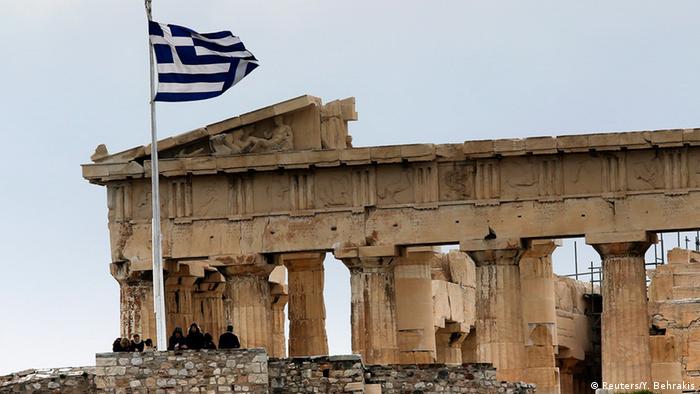 Vaso Vouvani, a quiet and determined middle-aged mother, had long wanted a leader who stood up for the interests of Greeks, "not bankers, Eurocrats or German politicians."

"We need fighters, not servants of the troika," she said, referring to the international lenders who had given Greece billions in bailout loans in exchange for punishing austerity measures that deflated the Greek economy. "We have lost our money and our dignity these last five years. We can't let leaders in Brussels and Berlin continue to hit us with austerity. It's not working!"

During the crisis, Vouvani lost her business, and she hasn't worked in four years. So she's been relieved and heartened to see 40-year-old Prime Minister Alexis Tsipras, whose leftist, anti-austerity party Syriza came to power two weeks ago, stand up to everyone from eurozone finance chief Jeroen Dijsselbloem to Greek oligarchs evading taxes.

"I hope he fights them all," she said. "I will be really disappointed if he backs down. I don't want to see another Greek politician lower his head to people who treat us like we're nothing."

In his first address to parliament, Tsipras said exactly what she wanted to hear. He promised to end austerity measures, help impoverished Greeks get sustenance and electricity, reform a corrupt political system, go after big-money tax evaders, even sell the taxpayer-funded luxury cars used by cabinet members and parliamentary deputies.

"Our government wants to be the voice of the people, to express the people's will," he declared in a long, emotional speech that earned him a standing ovation. 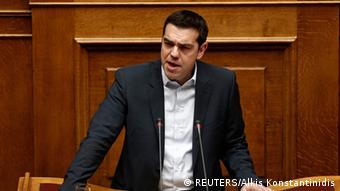 Nick Malkoutzis, editor of the Athens-based economic and political analysis website macropolis.gr, told DW that Tsipras' insistence on sticking to his pre-election promises are playing very well at home.

"This is driven by his belief that, unlike previous governments, this Syriza-led administration should live up to as many of the election pledges that it can," said Malkoutzis. "And unlike previous leaders, that he shouldn't cave in at the first sign of pressure from Greece's lenders."

That pressure has already come. The European Central Bank, for instance, has cut off credit to Greek banks. And the leaders of Germany, which has provided most of the bailout loans to Greece, have refused to back debt relief or any renegotiation of its debt deal.

Tsipras has said that he will seek eurozone cooperation on a "bridge program" - not loans, but some other kind of financing - to keep Greece solvent through the summer, in the hopes of striking a new deal. And though he put forth an ambitious policy agenda in his speech to parliament on Sunday, he was vague about details or the timetable for implementation.

"It is important to note that the vagueness of the implementation timeline, combined with the lack of detail, should give the government some room for flexibility in the negotiations with official creditors," wrote Wolfango Piccoli, managing director of Teneo Intelligence in London.

Tsipras' uncompromising stance takes Greece into uncharted territory. Some wondered if Tsipras' speech was a sign that Greece was headed out of the euro, something that polls show most Greeks do not want.

"Can't see how Greece now stays in the euro unless the electorate forces a change of [government] after capital controls imposed," tweeted Hugo Dixon, Reuters columnist and editor-at-large, and a close watcher of Greece, on Sunday evening.

Malkoutzis, however, thinks that eurozone exit fears are premature.

"Clearly Tsipras' strategy is high risk and because we haven't been here before, we don't know how the eurozone is going to react," he said. "But at the same time, he's not closing the door to negotiations. There's a small period of time in which these talks can take place, and it's clear they will be tense and uncomfortable.

"With previous administrations, the Greek side has gone into negotiations with the eurozone in the belief that there is no alternative than to accept the terms by the lenders. In this case, Tsipras is trying to flip the approach on its head."

Will the eurozone muddle through?

Opinion polls show that the strategy is working very well at home. Seventy percent of Greeks say they're happy that someone is finally standing up to the eurozone, whom they viewed as bullies.

Vouvani, for instance, is pleased that Tsipras wants to force Germany to repay a World War II-era loan that the Nazis had forced on the Greek government. "I don't have any problem with the people of Germany," she said. "But their leaders cannot keep telling us we owe their taxpayers money, that we're somehow depriving them of money, when they, too, owe us."

Malkoutzis said Tsipras has given Greeks a voice, but that the eurozone would have rather heard Tsipras "moderate his expectations, his goals, to be more conciliatory on points that concerned them, like privatizations or labor regulations."

"The question is, can the two sides, behind closed doors, find some common ground and resolve enough of their differences to keep muddling through, just as the eurozone has since 2010?" he said. "That remains to be seen."

Alexis Tsipras, Greece's new prime minister, has said he does not want to extend the European Union's bailout deal. Athens needs a "bridge program" until a new deal is finalized, Tsipras told parliament. (08.02.2015)

Athens has said it is preparing a comprehensive plan for managing the transition to a new debt deal. Newly elected Prime Minister Alexis Tsipras will present his policy program to the Greek parliament on Sunday. (07.02.2015)

Almost two weeks after Syriza's election victory, Athens vacillates between promises and practical policies. Many Greeks are concerned about the future, but they know things can't continue as before. (07.02.2015)