To tackle America's crumbling bridges, roads and airports, the US president prioritizes infrastructure spending. Critics say Trump's plan is just one-tenth of what is needed to address the problem. 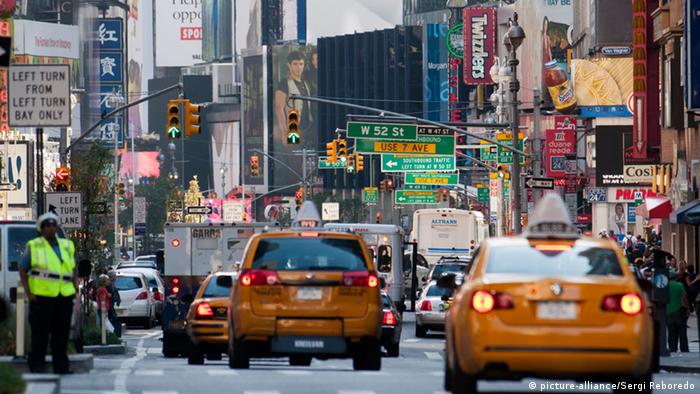 US President Donald Trump urged Congress to pass what he called "the biggest and boldest" infrastructure plan. He unveiled his second budget on Monday, which emphasized a $200-billion (€163-billion) pledge to deal with the country's decaying highways, airports, seaports and sewage networks.

The funds, which will be released over a 10-year period, are intended to undo decades of massive under-investment in infrastructure by Washington, which has led to a third of major roads falling into disrepair, and one in 10 bridges becoming structurally deficient.

The White House said over the weekend that the federal funds are part of a larger $1.5-trillion plan that is expected to be met by the private sector, and at the state level.

In addition, Trump's administration said it would eliminate bureaucracy that often delays new projects being completed.

Ahead of the budget reveal, Trump tweeted:"This will be a big week for infrastructure!"

But critics say the proposal will fail without a much higher federal investment, pointing out that half of the $200 billion will be used as incentives to help states and cities fund their own projects.

The Democrats have called for any plan to include opportunities to raise new tax revenues, which could mean raising the federal gas (petrol) tax.

But with the US federal deficit forecast by the White House to balloon to at least $984 billion next year, analysts believe Trump has little room for maneuver and will need to encourage private investors to plug the gap.

The scale of America’s failing infrastructure was highlighted in a report by the American Society of Civil Engineers, which gave the nation a grade of D+ for the state of highways, railways, bridges and other large public works.

It said the Trump plan would need a commitment of at least $2 trillion more than what is currently budgeted, US public broadcaster NPR reported. Although not at risk of collapse, New York's Brooklyn Bridge is one of 58,000 listed as structually deficient

The proposals are likely to face a difficult path to approval because of mid-term US Senate and congressional elections, which are set for November.

The infrastructure plan is part of Trump's proposals for a $4.4-trillion budget for next year, which will see the federal deficit rise sharply, and which will do little to meet the president’s promise of 2017 to balance the budget by the end of his second term, should he be elected again.

But the White House said over the weekend that the budget contains measures to lower the deficit by $3 trillion over 10 years.

The Committee for a Responsible Federal Budget has estimated that the spending plan passed by Congress last week to avoid a long-term government shutdown will alone increase the deficit by $420 billion over a decade.

Elsewhere in the budget proposals, Trump called for $686 billion for the Pentagon, which would lift spending year over year, but would still fall short of campaign promises for a rebuilding of the Navy and an "historic increase in military spending."

Border security had been assigned $23 billion, including $18 billion for a much-hyped wall along the US-Mexico border to keep out illegal migrants.

Trump's plan sees US real GDP growth at 3.0 percent this year and 3.2 percent in 2019, continuing low inflation, and low interest on US Treasury bills despite a flood of new borrowing. This is likely to be rounded upon by critics who say it underestimates the mounting cost of financing the government's $20 trillion-plus debt.

Congress has been charged with approving the budget for over 200 years, but government shutdowns over spending are a fairly new development. DW looks at how they started, when they became partisan and how much they cost. (22.01.2018)