Republican presidential nominee Donald Trump has come under fire for comments about the mother of a Muslim US Army soldier killed in Iraq. In response, the mother said Trump "doesn’t know what the word sacrifice means." 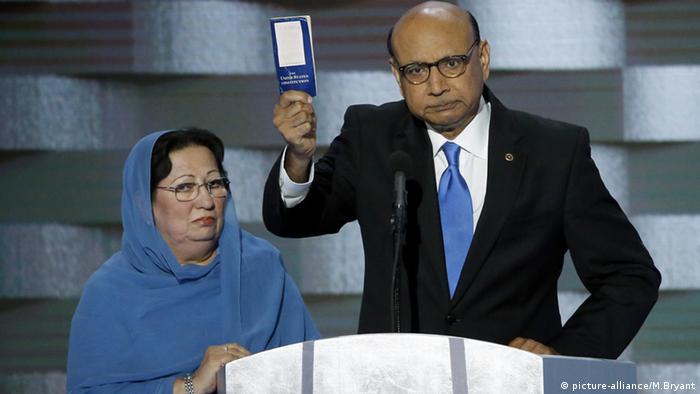 Ghazala Khan, the mother of the killed soldier, rejected Trump comments that "she had nothing to say" while standing next to her husband who have a moving speech at the Democratic convention.

In a speech billed as the biggest of her life, Hillary Clinton accepted her nomination as Democratic candidate for the presidency. She railed against rival Donald Trump, seeking to paint the Democrats as a party of hope. (29.07.2016)

Donald Trump's massive real estate portfolio has brought the Republican presidential nominee plenty of cash - but also headaches. DW takes a critical look at some of the billionaire's buildings around the world. (28.07.2016)

Trump's outlandish call was rejected not only by the Clinton campaign but also a top Republican leader and by Trump's running mate. Trump implied that his curiosity over the missing emails overides national security. (27.07.2016)

Trump made the comments after Pakistani-American lawyer Khizr Khan gave a moving speech at the Democratic convention on Thursday. In it, he criticized Trump's anti-Muslim, anti-minority and anti-women statements. He was flanked by Ghazala Khan, who wore a headscarf and chose not to speak.

Their son, Captain Humayun Khan, was killed by a bomb in Iraq in 2004, and was later honored with a Bronze Star and Purple Heart.

Ghazala Khan, however, has said she didn't speak because of the pain of her son's death.

Trump 'ignorant' on Islam and sacrifice

In an opinion piece in Washington Post, Ghazala Khan said it was still hard for her to talk about her son.

"Donald Trump said I had nothing to say. I do. My son Humayun Khan, an Army captain, died 12 years ago in Iraq. He loved America, where we moved when he was 2 years old. He died trying to save his soldiers and innocent civilians."

She also said that America "felt my pain" even if she did not speak at the convention.

"Donald Trump said that maybe I wasn’t allowed to say anything. That is not true. My husband asked me if I wanted to speak, but I told him I could not. My religion teaches me that all human beings are equal in God’s eyes. When Donald Trump is talking about Islam, he is ignorant," she said.

Trump also defended himself against comments from Khizr Khan that he had "sacrificed nothing and no one" for the country and should read the constitution.

The billionaire responded on Saturday by saying he had made many sacrifices.

"I work very, very hard. I've created thousands and thousands of jobs, tens of thousands of jobs - built great structures," Trump said. "Sure those are sacrifices," he added, claiming to have raised "millions of dollars" for veterans.

Paul Rieckoff, the founder and chief executive of Iraq and Afghanistan Veterans of America, told ABC that Trump's statement was an insult.

“For anyone to compare their 'sacrifice' to a Gold Star family member is insulting, foolish and ignorant. Especially someone who has never served himself and has no children serving,” he said.

"Donald Trump said he has made a lot of sacrifices," she wrote "He doesn’t know what the word sacrifice means."

"He was kind of trying to turn that into some kind of ridicule," Kaine said after a campaign event in Pittsburgh on Saturday, referring to Trump's comments. "It just demonstrates again kind of a temperamental unfitness. If you don't have any more sense of empathy than that, then I'm not sure you can learn it."

Even some Republicans have sought to distance themselves from his comments.

"This is a time for all Americans to stand with the Khans and with all the families whose children have died in service to our country," Clinton said in a statement. "Capt. Khan and his family represent the best of America and we salute them."