A key vote by the US House of Representatives on a health care bill to dismantle Obamacare has been withdrawn. The new law would have increased the number of Americans without health insurance.

US healthcare: Q & A with Betsy Leimbigler, JFK Graduate School in Berlin

US President Donald Trump said on Friday the Republican's health care reform bill had failed because it lacked support from the Democrats.

His comments came an hour after he told the US House Speaker Paul Ryan to withdraw the embattled bill just moments before Friday's vote was due to take place.

The American Health Care Act (AHCA) legislation had been widely predicted to be defeated if it had gone go to the lawmaker vote, despite the president's backing and the Republicans having a comfortable majority in both chambers of Congress.

US media described the decision to cancel the bill a humiliating defeat for Trump, who had campaigned on a promise to replace the Affordable Care Act, which is more popularly known as Obamacare.

The original policy was a key achievement of former US President Barack Obama's administration and saw an estimated an additional 17 million receive public health care insurance.

Obamacare was targeted at poorer Americans, including many women and those from ethnic minorities. 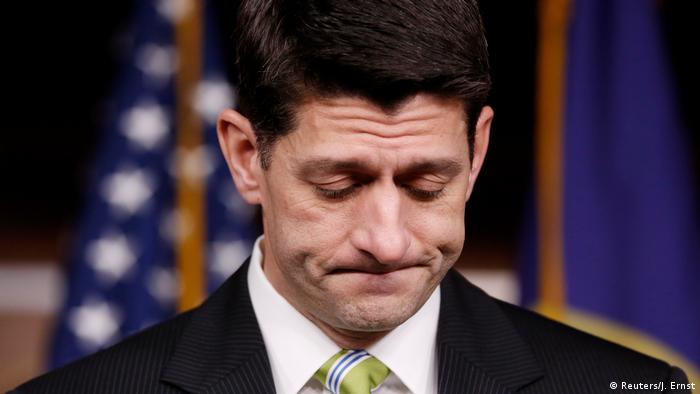 Its replacement, the AHCA, was widely seen as unwinding progress made by Obamacare.

Although the Republicans said AHCA would help cut the US budget deficit, the Democrats united against the bill, while some conservatives said it didn't go far enough to dismantle Obamacare.

Addressing the public from the Oval Office an hour after the vote was cancelled, Trump described Obamacare as a "mess" and warned that it would "explode," in reference to fears the policy was quickly becoming unaffordable for the public and state governments.

Reactions of investors worldwide have varied amid a delayed vote on US healthcare reform, whose passage is seen as crucial to Donald Trump's ability to push through his growth agenda. (24.03.2017)

President Donald Trump has warned Republicans that he wants a vote on a new healthcare bill to go through without further delay. The vote had been postponed amid a revolt by conservative Republicans. (23.03.2017)

"Last year you had 100 percent increases (in premiums) … and this year should be much worse," he predicted.

Trump said the new AHCA was just the beginning of three-stage reforms of US health care, which he claimed would have seen premiums go down.

The call to repeal and replace Obamacare was a key issue in Trump's election campaign. He vigorously backed the Republican's alternative health care plan.

He said he would now be "open" to working on a bipartisan measure on a new replacement for Obamacare.

House speaker Ryan held a separate news conference, confirming that the health care plan would now not face a ballot in Congress.

"We came close today but came up short," he told reporters, adding that the bill's postponement was "a setback but not the end of the story."

Ryan blamed "growing pains" within the new administration for the failure to pass the legislation.

The leader of the Democrats in the House, Nancy Pelosi, hailed the cancellation as a "victory for the American people." She said it was "very clear" that people still support Obamacare.

The AHCA vote was delayed once on Thursday, with Trump issuing an ultimatum to his party that if they did not support the ballot on Friday, he would move on to other political issues on his agenda.

Opposition to US health care bill delays vote on law

Opposition to US health care bill delays vote on law