The prime minister has apologized to First Nations people in the province of Newfoundland and Labrador for abuse at assimilation-oriented schools. The system of boarding schools operated until 1980. 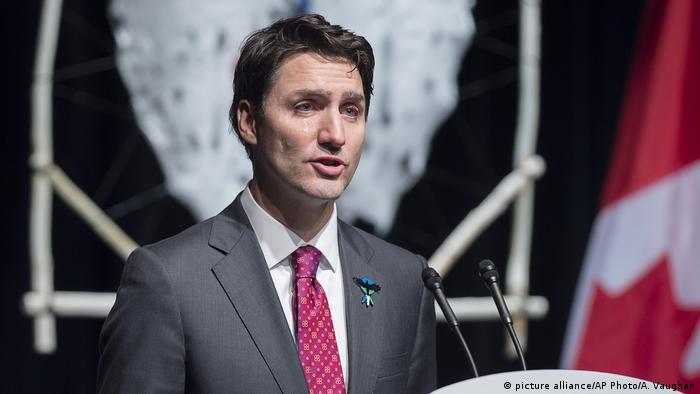 Canadian Prime Minister Justin Trudeau issued a sweeping apology on Friday to the indigenous people of Newfoundland and Labrador province for abuses suffered at assimilation-focused boarding schools throughout the 20th century.

"We are here today to acknowledge an historic wrong," a visibly emotional Trudeau said, asking forgiveness for the "physical, psychological and sexual abuse," that occurred at the five schools in the province which only shut their doors in 1980.

"These are the hard truths of Canada's history."

Trudeau's apology came as the government settles a class-action lawsuit brought by about 900 former pupils of the schools, many of whom were forcibly removed from their communities and isolated from their families in an attempt to force assimilation with mainstream culture.

According to The New York Times, the plaintiffs were awarded 50 million Canadian dollars in compensation.

At the ceremony in Happy Valley-Goose Bay with Trudeau was Tony Obed, a former student of the boarding schools and the leading force behind the lawsuit. Obed, who has spoken openly about sexual assault at his former school, accepted the apology from the Canadian government.

Assimilation boarding schools were common in the United States and Canada throughout the 19th and early 20th centuries, with some in Canada enduring until as late as 1996. In Canada, many of the schools were run by the federal government, and sometimes by missionaries and charity groups.

While former Prime Minister Stephen Harper issued a large apology for the network of schools in 2008, Newfoundland and Labrador was left out due to the fact that it wasn't a province of Canada until 1949.

A truth and reconciliation commission that followed Harper's 2008 apology found that the injustices perpetrated by the boarding schools amounted to "cultural genocide."

Although recent Canadian administrations have made efforts to right historic wrongs against indigenous or First Nations people, inequality remains rampant. A study by the think tank Canadian Centre for Policy Alternatives published in 2016 found that 60 percent of aboriginal children on reserves lived in poverty, and that First Nations women were significantly statistically overrepresented murder victims in Canada.

Canada has described a deal to compensate thousands of indigenous victims of forced adoptions as a step forward. But some have criticized the move, saying the amount is "disappointing" after decades of forced removals. (07.10.2017)

Indigenous leaders have told Pope Francis of the abuses suffered by children at Catholic schools. This week the pontiff will meet with three groups pressing him for an apology.