Berlin startup ImmunoLogik has identified an active agent that helps patients who have developed a resistance against standard HIV treatment therapies. 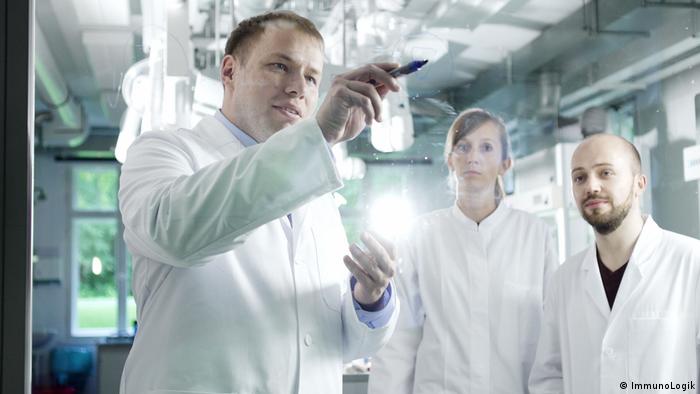 December 1 marks the 29th annual World AIDS Day. And to many, it might appear that HIV/AIDS in the developed world is primarily a problem of the past.

Yet the German startup ImmunoLogik is trying to dismiss this notion by bringing visibility to their compound which aims to treat previously untreatable HIV patients in western Europe and the United States — or 80 percent of the market share for all HIV drugs worldwide.

The small Berlin-based biotech company has identified the so-called IML-106. The active agent helps patients who have developed resistance to standard therapies that target the virus and, as a result, are at a high risk of dying from AIDS-related illnesses.

The number of such people currently stands at 80,000 in the US and western Europe, and is expected to grow to 110,000 in the next few years, says Christian Setz, CEO of ImmunoLogik and a former project leader of an independent HIV-1 research group at the Institute for Clinical and Molecular Virology in Erlangen.

"For me it's important to bring the topic back to the minds of people and say, OK, the current therapy is very effective", says Setz. "But unfortunately there is still a risk of failure, not to mention side effects. HIV is still a deadly disease, as it was in the '90s."

Beyond just targeting the virus

In fact, 22,000 patients in the US and Europe die each year because they have developed resistance to the current combinational antiviral therapy (ART), says Setz. HIV has the highest known mutation rate in the world. Thus these standard ART treatment drugs, which target viral structures, are prone to resistance formation and can become increasingly ineffective.

On the contrary, IML-106 targets cellular components, which have a mutation rate which is a million times lower than that of HIV. These components, called deubiquitinating enzymes (DUBs), play an important role in stopping the spread of HIV, says Setz.

"By inhibiting these cellular DUBs using IML-106 we could show that we can block the reproduction of HIV very efficiently, without obtaining any toxic effect," he adds.

The team's results were published for the first time in August in an international specialist journal. This class of DUB-inhibitors is the object of research for other companies — such as Progenra or Mission Therapeutics — but for cancers and inflammation. So far no research has yet been undertaken for HIV. Setz hopes their clinical trials "can also be of interest for these companies," he says.

The company has just kicked off their first financing round to raise €1.6 million ($1.9 million), raising money both through crowdfunding and donations from private investors.

The combined worldwide market for HIV/AIDS drugs amounts to $24 billion, according to a recent article in the science journal Nature. This presents several new opportunities for ImmunoLogik, which has a patent pending for IML-106 in 42 countries including the EU, US, Canada, Australia, Brazil and Turkey. 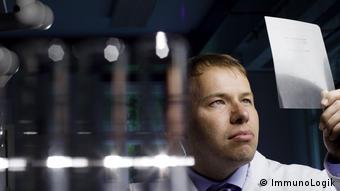 The patents for HIV drugs of the big players in the market such as Gilead, ViiV, or Bristol-Meyer Squibb — potential licensing partners for ImmunoLogik — have either expired recently or will expire in the years leading up to 2021, when the company intends to start their first clinical study. They plan to fully bring the drug to the market by 2025.

"Those companies have a great interest in novel, innovative developments," says Setz. HIV biotech companies which purchase licenses from big players are anticipated to reach revenues between $286 million and $620 million per project.

Not surprisingly in order to better market the drug after it has been approved, ImmunoLogik is seeking a partner from a large pharmaceutical company, such as Gilead.

"This partnership has advantages on both sides," says Setz. "For us as a biotech company, we can get external capital in order to finance our research. We also get the external structure and marketing skills."

Worldwide there are over 36 million people with HIV/AIDS. Last year there were around 1.8 million new HIV infections diagnosed, with over 3,000 of those in Germany.

"In recent years AIDS has largely disappeared from the public eye," says Setz. "However, the disease is still not curable and many people worldwide are affected by their serious consequences."

The birth control pill, often simply called "the pill," was first approved for use 60 years ago. The oral contraceptive changed lives and lifestyles. It was championed but also condemned. But how relevant is it today?