Treating the Ebola virus in Hamburg

Until recently, the deadly Ebola epidemic in West Africa was far away from Germany. Now, infected patients may come to Hamburg for treatment. But specialists are prepared and hope to gain new insights into the virus. 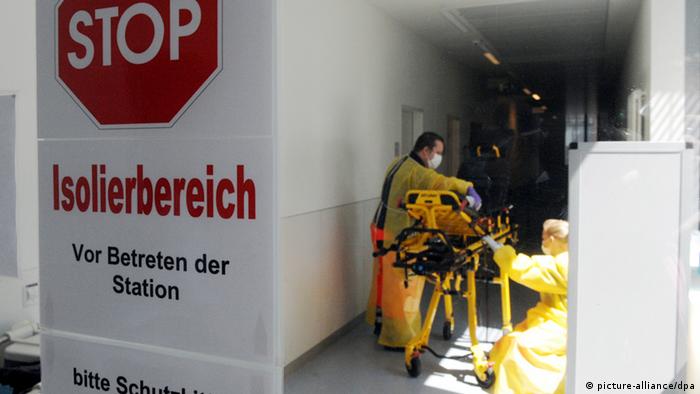 For Sheik Umar Khan, help came too late. He was supposed to fly on a military transport plane to Hamburg for treatment. The doctor from Sierra Leone, a local folk hero, was being treated at a makeshift hospital run by Doctors Without Borders in Kailahun in the eastern region of his home country. Khan caught Ebola after treating hundreds who were infected with the virus.

"We were actually anticipating the patient's arrival over the weekend," Dr. Jonas Schmidt-Chanasit, head of the viral diagnostic unit at Hamburg's Bernhard-Nocht-Institute, told the German public broadcaster NDR.

But Khan's arrival in Hamburg was delayed due to his touch-and-go health condition. On Tuesday, his condition rapidly deteriorated, and he succumbed to the virus. Although the clinic in Hamburg didn't have the chance to help Khan, it might take in other Ebola patients from West Africa.

Last week, the doctors in Hamburg agreed to a request from the World Health Organization (WHO), which asked the clinic to take in two Ebola patients. The city's health authorities activated their contamination unit and declared that they were prepared and could organize the arrival of the patients within a few hours. The plan was for the Hamburg fire department to transport the patients from a specially equipped plane to the university clinic in Hamburg-Eppendorf. 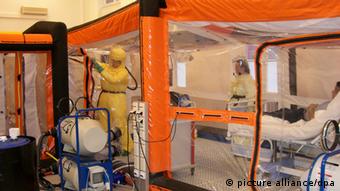 The university clinic has made six beds available in a segregated part of the facility. In this isolation unit, no liquids, gases or particles in the air can reach the outside world. Access is only possible through three airlocks. In the first, the air pressure is slightly reduced; in the second and the third even more so. That's to ensure clean air from outside is able to come in, but contaminated air from inside is not able to go out. Up until now, the unit has only been used for training.

The doctors and nurses wear special pressurized suits that are similar to those used by astronauts. Sweat cannot reach the outside and exhaled air is recycled through a filter. But working in these suits for more than three hours at a time is very difficult, according to Dr. Stefan Schmiedel, who specializes in tropical diseases. Since cleaning the suits is difficult, they are incinerated after use.

"The security precautions that we have taken here are so comprehensive that one can assume that the population is safe," Schmiedel told NDR. "And the medical personnel are protected to the greatest extent possible and can conduct their work without reservations."

Fear of the virus

But the possible arrival of Ebola patients in Hamburg has become a topic of heated debate, above all in Internet forums. The comments are sometimes openly racist. On the news website Spiegel Online, many users question whether there's really no danger of infection. They criticize the decision to bring Ebola patients to a city populated by more than a million people like Hamburg. It's a "delusional idea," according to one commentator. Other users say they trust the Hamburg doctors and believe that helping Ebola patients is appropriate.

The Ebola virus is indeed very dangerous. There is no cure against the disease. But the human body is capable of defeating the virus on its own, according to Schmiedel. But that's only possible when the body's functions are successfully stabilized. The patient has to use a breathing machine; their digestive system has to be artificially supported; and their body temperature has to be regulated. In addition, constant infusions are necessary, because Ebola patients lose a lot of fluid through vomiting and diarrhea.

One could consider using experimental treatments on Ebola patients in Hamburg, according to Schmiedel. Admitting Ebola patients to the clinic could help advance medical research. But even if the virus doesn't come to Hamburg, the researchers have been active in the epidemic region. Since March, medical personnel from the Bernhard-Nocht-Institute in Hamburg have been operating a mobile laboratory in Guinea, where the epidemic first started.