Travel Agency Offers Nude Flights for German Naturists | News and current affairs from Germany and around the world | DW | 28.01.2008

To cater to eastern Germany's high proportion of naturists, an Internet travel agency based in Erfurt is offering a special flight to popular vacation spot, Usedom. The catch? Before take-off, you have to strip off. 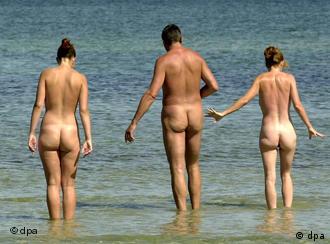 Bonus -- from plane to beach with no outfit change needed

"Ladies and gentleman, in preparation for take-off, please ensure your seatback is upright, your hand luggage is safely stowed, and that you've removed all your clothing."

That's what the on-board announcement en route to the isle of Usedom might sound like if Internet travel agency OssiUrlaub.de succeeds with plans to launch the first nudist charter flight to the popular Baltic Sea destination in July. The flight personnel making the announcements will be fully dressed, however -- for security reasons.

OssiUrlaub.de thinks its innovative nudist flight is the perfect way to target eastern Germany's large population of "FKK" devotees. FKK, the abbreviation of the German term for "free body culture," is essentially naturism, and was an authorized and extremely popular tradition under communist rule.

Grin and bare it

Many eastern Germans, nicknamed "Ossis," are nostalgic for that tradition, especially now that they feel frowned upon by their more prudish western German neighbors.

"In the former East Germany, naturist holidays were a much-loved way of spending the best weeks of the year," said the founder of OssiUrlaub.de, Enrico Hess. "We want to make that freedom possible above the clouds, too."

The first nude flight will be a day-trip on July 5 between Erfurt and Usedom, with its many FKK beaches.

"All the passengers will fly naked, but they will only be allowed to undress once they are in the plane," Hess said. "But then they will be able to enjoy the hour-long flight in the way God intended."

Tickets cost 499 euros ($735) and there are just 50 seats available on the jet -- there was no word on whether the seat cushions would be dry cleaned between flights.

If the virgin flight is a success, regular flights to Usedom or other destinations will be planned, Hess said.

The Baltic Sea stretching from eastern Germany to Poland used to be a Mecca for beach bums who prefer skin to skivvies, but is an onslaught of prudish Western visitors spoiling the tradition? (10.08.2004)

The Fight to Let it All Hang Out

When summer temperatures soar, so do tempers over the amount of flesh shown in Germany's public places. DW-WORLD talks to an expert on the roots, uniqueness and apparent east-west divide in German "free body culture." (01.08.2002)

What do you make of OssiUrlaub.de's latest business idea? Please include your name and country in your reply.