The European Commission unveiled its proposal for a tax on financial transactions on Wednesday. The bloc is divided on whether the tax is long overdue or whether it will in fact drive business away from the bloc. 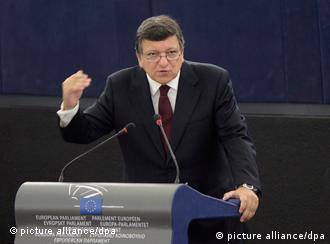 Barroso outlined the plan in his State of the Union address

European Commission President Jose Manuel Barroso proposed a tax on financial transactions in his annual State of the Union speech before European parliamentarians in Strasbourg on Wednesday.

"It is time for the financial sector to make a contribution back to society," Barroso said, stressing the role financial companies played in the current economic crisis and describing them as "under-taxed" in comparison with other sectors.

The financial transaction tax has been on the drawing-board for more than a year and was given fresh impetus last month, when French President Nicolas Sarkozy and German Chancellor Angela Merkel pushed it to the top of the agenda of their meeting. 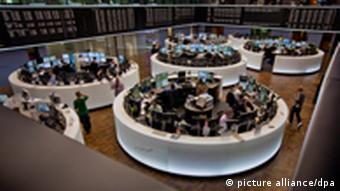 The financial sector is under-taxed, according to the EU Commission

The European Commission adopted the proposal despite opposition in the United States and in Britain, which are both homes to major financial markets.

The proposed tax would impose a levy of 0.1 percent on all bond and share transactions between institutions when at least one party is based in the European Union. The levy on derivatives would be at a rate of 0.01 percent.

The tax would come into effect across the European Union at the start 2014. It would raise some 55 billion euros, Barroso said, and would not be a further burden to the 500 million people living in the EU.

The tax can only be introduced unanimously, meaning that any EU member state can veto the proposal. So far Britain, the Netherlands and Sweden have indicated they staunchly oppose the proposal.

A spokesperson for the UK Treasury told the BBC that it would "absolutely resist" any tax that was not introduced globally. "We would not do anything that is not in the UK's interests," the British broadcaster quoted him as saying.

The UK is home to the EU's biggest financial services industry. Experts estimate that some 80 percent of the revenues of any Europe-wide financial tax would come from London.

The European Commission has already announced that if Britain vetoed the proposal, it would seek to introduce the tax in the eurozone only. 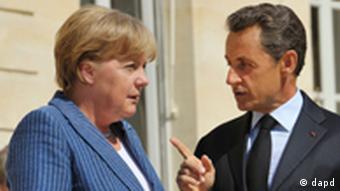 Both Merkel and Sarkozy support the proposal

According to the German Institute for Economic Research (DIW), the tax would effectively limit the number of transactions on stock markets and avoid the extreme price spikes critics associate with high-frequency trading. The institute would, however, prefer a tax that covers all 27 EU member states, economic experts Gert Wagner and Dorothea Schäfer wrote in the German daily Tagesspiegel.

The two experts said that if the tax is only levied in the eurozone, mitigating measures should be introduced to avoid the relocation of financial transactions - a major concern among the critics of the proposal.

"The tax could be raised in the country where the potential client has its headquarters. If the client is a bank or an insurance firm, it won't simply relocate its headquarters," Wagner and Schäfer said.

There is widespread concern that the tax may drive business away from the EU, increase the cost of raising capital and, in the long run, damage member states' economies.

The Financial Times newspaper reported a draft European Commission impact assessment of the proposed tax found that gross domestic product (GDP) in the EU could shrink by 1.76 percent in the long term if the tax is introduced. 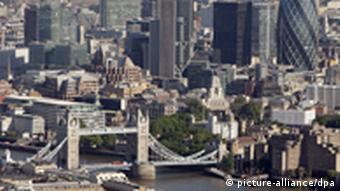 The newspaper said the same assessment warned revenues generated by the tax would amount to just 0.08 percent of GDP, or 10 billion euros. That would mean the tax would cost significantly more than it would raise for governments.

The paper quoted European officials who said some "mitigating effects" in the final tax design would, however, limit the negative impact on economic output to around 0.5 percent in the long term, partly because the revenues could be invested to stimulate growth.

More details on the proposed tax are de eto be released over the next few weeks so the plan can be presented at the G20 meeting in Cannes in early November. EU finance ministers are expected to discuss the proposal at another meeting next week.

Greece's finance minister has announced additional austerity measures, after he admitted they were badly needed. But he vowed that Athens would do anything to stay in the eurozone. (21.09.2011)

Europe puzzles over Germany's line on the euro

Germany opposed eurobonds, German ministers talk about Greek insolvency - the European Union is unsettled by what looks like German lack of commitment. (19.09.2011)

In an article published five years before the launch of the euro Martin Feldstein wrote that the new currency could lead to severe friction in Europe. Now the noted economist says several countries should leave the euro. (16.09.2011)