Tracking the ′ice island′ that broke off Greenland | Science| In-depth reporting on science and technology | DW | 11.08.2010

Tracking the 'ice island' that broke off Greenland

A 260-square kilometer ice sheet has split off from Greenland's coast and may threaten shipping lanes and oil platforms. Deutsche Welle speaks with the Canadian Ice Service researcher who first spotted the "ice island." 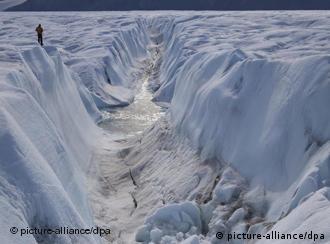 Deutsche Welle talks with Trudy Wohlleben, the researcher with the Canadian Ice Service who discovered a 260-square kilometer (100 square mile) ice island that has torn away from Petermann Glacier on Greenland's northwest coast. It's feared the massive floating ice sheet could enter shipping lanes or run into oil platforms while drifting south.

Deutsche Welle: What do you do as an ice forecaster?

What have you discovered in Greenland?

On the northwest coast there is a glacier, Petermann Glacier, which is known for calving off large tabular icebergs or ice islands. We've been monitoring this glacier for a while expecting a large piece to fall off, and on August 5 a large section actually did break off - much larger than we actually anticipated. It was about 30 kilometers (18.6 miles) long and 10 kilometers wide. 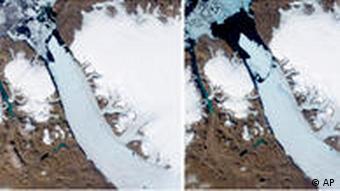 What is the significance of this?

Usually what happens is once they enter the Nares Strait they drift southwards with the currents - usually it fragments when it comes south - but the larger pieces can eventually make their way into the shipping lanes off the Labrador Coast in Newfoundland. Even though it takes a year or two to descend that far, we like to put tracking beacons on the large pieces and monitor them for hazards to shipping and to oil platforms.

Not all satellites can see through clouds, so sometimes on cloudy days you'll lose the position. What we like to do is put a beacon on the ice island; it sends a signal that satellites can track so we can know its position at all times. That way we can monitor the rate of drift of the ice island, the speed and its location.

Given that ice island calving is a relatively common phenomenon, can you explain why people are so interested in this instance?

Calving of ice islands is indeed quite average. I think what's special about this instance is just that it's so much bigger than any other one that's calved. The last large one of this size was back in the '60s. So I think it's just the sheer size of this ice island which has everyone so excited - and perhaps also that it's all in one enormous piece.

What exactly did you see when you realized that the ice island had broken off?

Well, it looks like a big blue line through a nice, white glacier on the satellite image. We essentially then realized that a section has floated off into the ocean. Yeah, it's quite dramatic if you look at the pictures.

How did you feel when you initially saw the pictures?

Sure, I was excited. I knew the sea ice community would be excited; I didn't realize the whole world would get so excited about it! 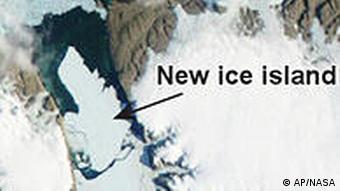 What do you think this could mean for the shipping industry and business?

It's hard to say. A similar calving event occurred in 2008, albeit much, much smaller. In that case, it broke in July, and it took about a year for it to come down the coast of Baffin Island. Near Frobisher Bay - at the south end of Baffin Island, which is the northern tip of Labrador - it broke into hundreds of pieces and then started coming down with the main iceberg pack down the Labrador coast. In that case, the pieces were the size of normal icebergs coming down the coast.

I think this instance, though, because so much more ice has broken off, will produce larger chunks of ice that will come down into the shipping lanes where the oil platforms are. The danger is - once they get to where the oil platforms are - if the icebergs are too big then the normal methods used to break up the ice as it approaches the platform will have a lot more difficulties.

Is it possible that this ice mass will 'ground' and stay wherever it hits land for decades?

It is a possibility. The depth of the ice island is about 55 meters (180.4 feet). These things are so deep that they tend to drift not with the wind, but with the currents deeper down. There is always a chance it will survive and make it all the way south, as the one in 2008 did.

In our profession, this will most certainly mean additional work tracking the ice island and also the fragments as it starts to fracture. But next year we would have to prepare either warnings or watches for shipping lanes downstream and for the oil platforms.

Does this tell us anything about climate change?

This is a really tricky question. There are so many factors at work, which makes it hard to link these events to any one specific cause. There's the ocean circulation underneath the floating tongue of the glacier and the heat content of the ocean. And then there are the katabatic winds coming off the Greenland ice cap. All these things play a role, and I am in no place to speculate on any one thing that it could be attributed to.

If you were standing in the middle of it, you wouldn't really know you were even on a floating piece of ice. If you were on a ship, it would look like a big wall of ice rising out of the ocean.

For most Europeans, Iceland's volcanic eruption is a bad memory. But the effects continue to be felt in Iceland, where Deutsche Welle caught a glimpse of a once pristine national park, which is now an ash wasteland. (07.06.2010)