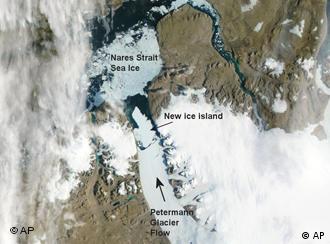 A giant sheet of ice totaling 260 square kilometers (100 square miles) has broken off an ice shelf in Greenland. While the country has experienced massive glacial loss due to melting in recent decades, experts say it is unclear if this particular glacial event is connected to climate change.

Trudy Wohlleben, a researcher with the Canadian Ice Service, got quite a surprise when she discovered the gigantic iceberg. While reviewing NASA satellite images, she noticed that a massive ice island had torn away from Petermann's Glacier, on Greenland's northwest coast. It's common for glaciers to shed ice - a process called calving - but this size of ice island is rare.

"What's special about this one is that it is just so much bigger than anything that's calved recently. The sheer size. Everyone's so excited," Wohlleben said in an interview with Deutsche Welle. 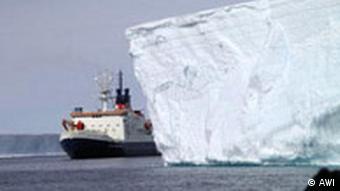 Icebergs can cause problems for shipping routes

The enormous sheet of ice is said to be four times the size of Manhattan. "If you are on a ship it would look like a big wall of ice rising out of the ocean. It is up about five or 10 meters above the water," Wohlleben explained.

The ice sheet is now headed towards the Nares Strait, a waterway between northern Canada and Greenland. Scientists are concerned that it may eventually flow right out into the North Atlantic. That would be a big headache for the shipping and oil industries which are based off Canada's east coast.

"There's a chance larger chunks will come down into shipping lanes and towards the oil platforms," Wohlleben said. "If they are too big, then towing and waterbomber techniques to break up the iceberg will be much more difficult to apply."

Dr. Martin Melles, a professor of Geology at the University of Cologne, explained that 90 percent of the massive ice island is beneath the water. If it drifts into the ocean, it will be difficult to see and will require monitoring.

He's confident that modern technology will help avoid serious accidents at sea. "This is not the time of the Titantic. Nowadays, icebergs can be observed by satellites. Or even positioned with a censor so that they can always can be found, even if the weather is bad," Melles said in an interview with Deutsche Welle.

But Melles is concerned that the ice island will run aground.

"According to its geological location and marine currents, it's expected this iceberg will go southwards to Newfoundland and Labrador and ultimately end up in the North Atlantic," said Melles. If it strays into shallow water, the geologist said its huge base will likely be lodged for decades before it breaks free again.

"We cannot know where this might happen. It could happen in the shipping lanes," Melles said.

Now Shipping and oil industries are keeping close watch on the ice island as it travels through the Nares Strait. Alexander Yusfin works for the shipping company Poseidon Freighting and believes this glacier could be bad news for his shippers. 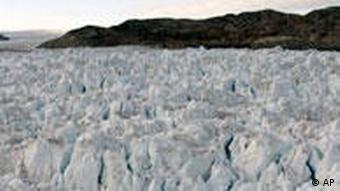 Researchers track glacial movements in Greenland and the arctic

"We cannot go through if there is big ice. That's going to be a big delay. But it depends on climate and we can't control the weather. These ships carry 6,000 containers. And if they are stuck, they're stuck."

Scientists have said global temperatures in the first half of 2010 were the highest on record. Temperatures in large parts of the Arctic have risen faster than the global average in recent decades.

But Melles says it remains unclear if this particular ice event is actually a result of climate change.

"Most of Greenland is lost as a result of melting. With respect to Petermann, experts estimate 80 percent is lost by melting and less than 20 percent by calving," said the geologist. He added that it is possible that the increased melting may have caused increased calving. But that is hard to prove, since scientists cannot easily access the underside of icebergs.

The Northeast Sea Passage -- a shortcut between East Asia and Europe first gained notoriety when Sir Hugh Willoughby, a British voyager, died in 1553 whilst trying to find it. Now the ice is melting because of global warming and a German shipping company has decided to attempt the same route in reverse -- from South Korea to Europe. Two of its ships already made it to Siberia. (21.09.2009)