They are large-format photographs of offices, bedrooms and prisons. Some show street scenes, city views or capture entire landscapes. But only a few show people. Photographer Anja Bohnhof's pictures strike a relaxed, narrative tone. There is no hectic documentary photography here, as one would expect from the turbulent, earth-shattering life of Indian lawyer and activist Mahatma Gandhi (1869-1948).

With the illustrated book Tracking Gandhi, Bohnhof has succeeded in creating a photographic biography, just in time for Gandhi's 150th birthday on Oct. 2, 2019 and on which the Indian freedom fighter is remembered worldwide.

India, Bangladesh, Great Britain, South Africa — wherever Gandhi lived and worked, Bohnhof went looking for traces of his presence. For five years, she traveled around the world, visiting and photographing three categories of places with her analogue camera. There are those that Gandhi is still remembered for — such as his birthplace in Porbandar or ashrams in India, or other places — such as prisons in South Africa and India, where Gandhi was imprisoned for years. There are also those without a visible legacy.

With her opulent, bilingual book, Bohnhof traces Gandhi's life in illustrations. Each picture is accompanied by well-researched texts, as well as quotations by the freedom fighter, to offer an enlightening read. "It wasn't my intention to reflect Gandhi's aura in all these places," the photographer said as she explained her approach. "But it is the only possible approach to Mahatma Gandhi when you're including the visual into the narrative."

Already during his lifetime, Gandhi, whose birth name was Mohandas Karamchand Gandhi, was world-famous. In South Africa, where he had moved in 1893, he fought against racial segregation and for equal rights. In India, where he returned in 1915, he began leading the independence movement. Gandhi demanded human rights for Dalit, the lowest caste in India, who are considered "untouchable," as well as for women. 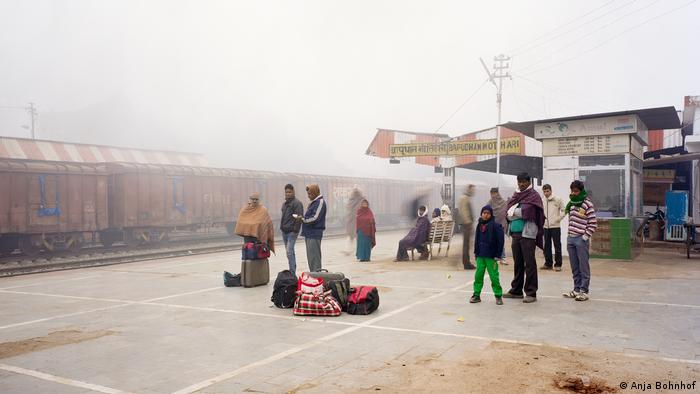 Gandhi's Champaran Campaign led him to Bihar in 1917, where he supported farmers in their struggles with British land owners

He called for reconciliation between Hindus and Muslims, fought against colonial exploitation, and for an economic system characterized by a peasant lifestyle. Nonviolent resistance, civil disobedience and hunger strikes — with such methods the Indian independence movement forced the end of British colonial rule in 1947 and India became divided. Half a year later, Gandhi was assassinated.

Anja Bohnhof, born in 1974, has already completed several book and exhibition projects on the Indian subcontinent. In 2012, she created "Bahak," a series of portraits of Indian porters on the streets of Kolkata. In "Krishak" she accompanied West Bengali farmers harvesting rice in 2018. In 2015, the Indian Cultural Council awarded her a prize for her German-Indian commitment.

The Tracking Gandhi book, published by Edition Inventio, is also accompanied by an exhibition. The National Gandhi Museum in New Delhi is showing the works from October 15 2019.

The prime minister's BJP is on course to score a spectacular victory in India's general election. If the lead holds, it would be the first time a party has won back-to-back majorities in Parliament since 1984. (23.05.2019)

Tracking down Gandhi through photographs

Wherever he was, Mahatma Gandhi fought for human rights. He led India non-violently into independence. Marking his 150th birthday, Anja Bohnhof pays tribute to the freedom fighter with her photographic insights. (02.10.2019)