Tracing the flow of Nigeria's stolen oil to Cameroon

The theft of crude oil in Nigeria has cost the country €9 billion in the last two years. DW's Fred Muvunyi traced the illicit flow of 'fungue' to a port across the border in Cameroon. 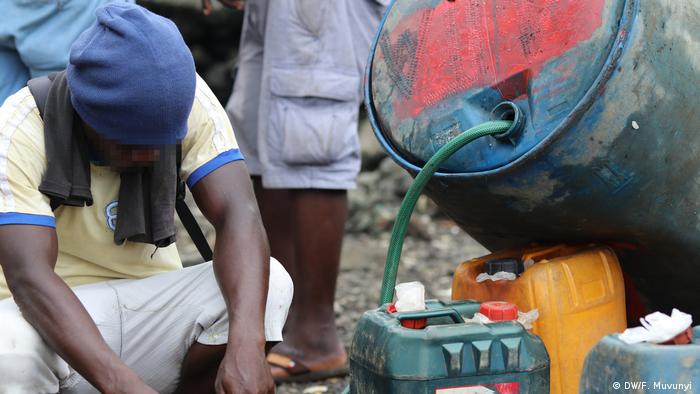 The noise of heavy vehicle traffic and portside traders greets you at Idenau on Cameroon's border with Nigeria. Vigilant gun-toting soldiers, police and security guards patrol the area. Journalists like me are closely monitored and severely restricted.

The soldiers are quick to warn that the use of any photographic or recording devices is strictly prohibited without written permission from the authorities.

With that clearance in hand, I make my way to the waterside to find fishermen who can tell me about the local industry, with the policewoman assigned to escort me in tow.

But why is there such a heavy smell of fuel in the air? What could that have to do with the fishing industry?

A man approaches cautiously and says he recognises me from a DW Facebook Live post. Where is the smell of oil coming from? Eyeing my unarmed official companion carefully, he slides closer and whispers: "This fuel is from Nigeria."

"I just came to buy some stuff, something illegal. With the challenges around, you need a place where you can earn a living," he confides.

I realize I've stumbled upon an area at the center of the cross-border flow of stolen Nigerian crude oil on this side of the border in Cameroon.

A few fuel smugglers and dealers are willing to talk to me, out of earshot of the police officer. They tell me their stocks arrive at Idenau via Oron, Ibaka and Delta in Nigeria. It takes about three days to get to the port from Delta in their wooden cotonou boats. Some of the vessels bring in more than 300,000 liters of oil in one trip. 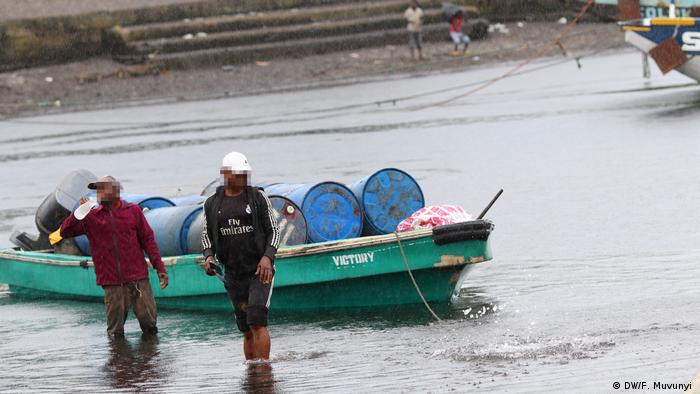 When the cotonou boats with the contraband cargo come in to anchor at Idenau, the port fills up with people. Fuel dealers, soldiers, police officers and customs officials are among them.

The 200-liter drums and jerrycans of fuel are offloaded and sold portside, or driven away on trucks. "People come from all over to buy, from Yaounde, Limbe, Douala and all the towns around," one of the dealers says.

Despite the risk of prosecution, the locals say they have no choice but to use the black market fuel they call "fungue" or zoazoa" to fill up their cars.

"We buy fungue because we don't have filling stations here,” Mike Mujong, one of the dealers, says. 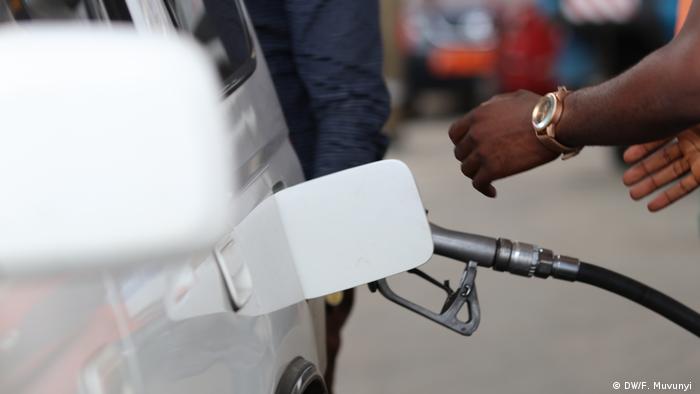 Motorists in Cameroon prefer fuel smuggled from Nigeria, which costs less than half the price of fuel at a petrol station

The soldiers and police officers are as much a part of the trade in the stolen fuel as the dealers.

"The security personnel seize this fuel from the guys who are selling. They put it in their cars and meet those who have settled [bribed] them and sell the fuel back to them," Mbella Yondo, a taxi driver, says.

On the road out of Idenau to Buea via Limbe, the extent of the illicit fuel trade is apparent. Fuel traders ply their trade at makeshift roadside structures, as soldiers mill about outside.

Residents and soldiers in these communities in south west Cameroon say they supplement  their meager earnings by trading in the fuel.

It is not surprising that the government's efforts to curb it repeatedly hit a deadend, Yondo says.

"Why do they say it's illegal when it's being sold by military personnel in the government service vehicles?"

Some of the smugglers even suggest that the government relies on their business to keep the jobless masses quiet.

Nigeria is Africa's largest oil producer, with a maximum crude production capacity of 2.5 million barrels per day.  The Nigeria Natural Resource Charter (NNRC) recently estimated that the theft of crude oil cost the country about 3.8 trillion Naira (€9 billion, $10.4 billion) in 2016 and 2017.

Cameroon itself has a crude oil output of some 81,000 barrels per day, making it Africa's 12th largest oil producer.

A liter of stolen Nigerian fuel costs 500 CFA (€0.90 cents) on Cameroon's black market, whereas a petrol station charges 700 CFA for fuel from the country's only oil refinery – located just eight miles (12.8 km) outside of Idenau.

I can still smell the fumes as I write about oil instead of fishing, although the taste of that traditional dish prepared with the catch of the day in Idenau lingers too.

A Nigerian police investigation has retrieved hundreds of millions of dollars in stolen state oil funds. It came as an Italian court sentenced two men to four years in jail in a case involving Eni and Shell in Nigeria. (21.09.2018)

Welcome to this week's eco@africa

This week on eco@africa, we have stories about a green car wash in Cameroon, a powerful cotton wool that could clean up oil spills and a self-charging bike. And we go in search of a rare frog. (24.08.2017)

Nigeria has formally relinquished its claim to the oil-rich Bakassi peninsular, ending a dispute with Cameroon that once brought the two nations to the brink of war. (10.10.2012)