As the Tour entered the Pyrenees, the man of the day was once again a Briton from the African Dimension Data team - Stephen Cummings. But the big news was an inflatable arch near the finish line. 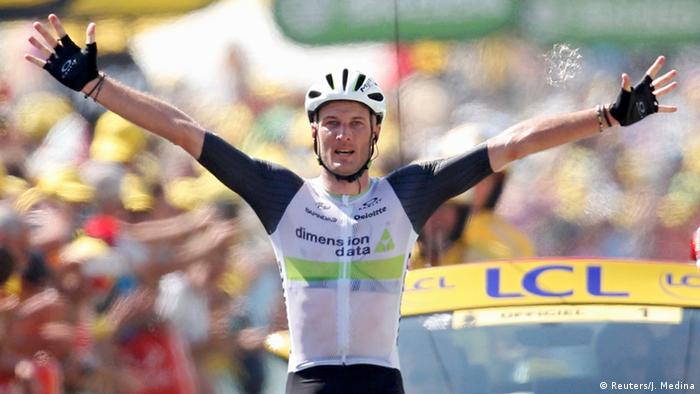 Anyone expecting Tour favorites like Chris Froome and Nairo Quintana to make a move on the first major climb of this year's event was severly disappointed. Instead Stephen Cummings seized the moment on the 162.5-kilometer stage from L'Isle Jourdain to Lac de Payolle.

The 35-year-old Cummings broke away from the peleton with a group of 29 riders that included overall leader Greg Van Avermaet of Belgium and Giro d'Italia winner Vincenzo Nibali. Cummings attacked just before the ascent of the 1490-meter Col D'aspin.

None of the others were able to reel him back in on the seven-kilometer descent to the finish. Cummings rolled across the line in just under 3 hours and 52 seconds, ahead of South Africa's Daryl Impey and Spain's Daniel Navarro. Nibali and Van Avermaet were fourth and fifth.

Van Avermaet was able to extend his overall lead in part to the fact that an inflatable arch one kilometer from the finish line deflated after stage leaders had passed under it. The peleton, however, was hindered in its attempt to complete the stage.

The Beglian now holds an advantage of 6:36 over France's Julian Alaphilippe and 6:38 over Spain's Alejandro Valverde.

Make that three Tour stage victories at this year's edition of cycling's premier race for Mark Cavendish. Ahead of the Pyrenees, the English speedster had the last laugh on Germany's Marcel Kittel in a final sprint. (07.07.2016)