Make that three Tour stage victories at this year's edition of cycling's premier race for Mark Cavendish. Ahead of the Pyrenees, the English speedster had the last laugh on Germany's Marcel Kittel in a final sprint. 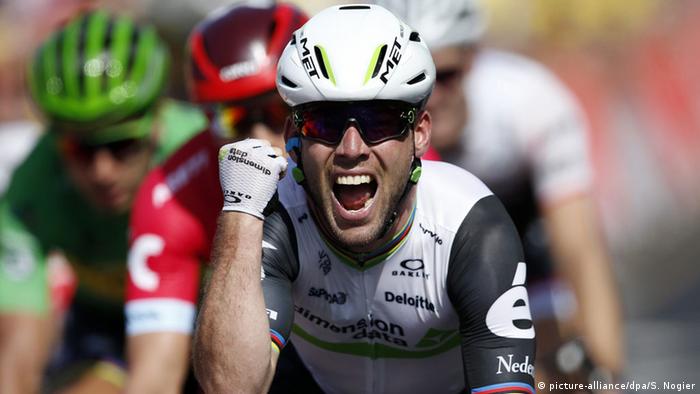 Stage six took the riders on a 190.5-kilometer jaunt from Arpajon-sur-Cere to Montauban in southwestern France, made more difficult by temperatures that reached 36 degrees Celsius.

Yukiya Arashiro and Jan Barta dominated the stage early on, breaking away from the pack and building up a four-and-a-half minute lead at one point. But the peleton reeled them in 22 kilometers from the finish line, setting the stage for a mass sprint.

There the 31-year-old Cavendish just got a neck in front of Kittel over the final 200 meters to secure his 29th career Tour stage win. That's second most in cycling history, behind only Belgium legend Eddy Merckx.

It's the first time Cavendish has won three stages in a single race since 2012. He now takes over the green jersey for the most points collected in the event thus far from Slovakia's Peter Sagan.

Belgium's Greg van Avermaet keeps the overall leader's yellow jersey after maintaining a 5 minute, 11 second advantage over Frenchman Julian Alaphilippe. But the race for the title looks set to be shaken up as the Tour enters the Pyrenees and riders face the first major mountain, the Col d'Aspin, in Friday's stage seven.

Kittel back to his best with narrow Tour stage win

Marcel Kittel burst back into the limelight when he prevailed in a mass sprint to the line to win stage four at the Tour de France. Peter Sagan retained the yellow jersey before the race hits the mountains on Wednesday. (05.07.2016)