Top Belgian mediator offers to quit over budget stalemate | Europe | News and current affairs from around the continent | DW | 22.11.2011

Inter-party bickering has kept Belgium from forming a new government for 17 months and the country's interim government is at a loss. It's not the first time mediator Elio Di Rupo has offered his resignation. 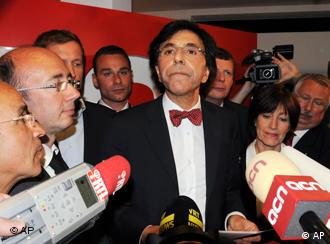 Di Rupo has given the king his second resignation offer

The head negotiator tasked with ending Belgium's 17-month political stalemate offered his resignation Monday after talks on the 2012 budget ground to a halt.

Elio Di Rupo, leader of the Francophone Socialists, has failed to lead a six-party coalition of Dutch and French-speaking Socialists, Liberals and Christian Democrats to agreement on budget cuts that would save 11.3 billion euros ($15.2 billion) in order to bring the country's deficit below 2.8 percent of gross domestic product, in compliance with European Union rules.

Di Rupo met with King Albert II and "reported on the deadlock in negotiations on budgetary, social and economic issues that should pave the way for the formation of a government," a statement from the palace said.

He "asked the king to be dismissed of his [government formation] mission," but the king postponed a decision on Di Rupo's resignation.

"The king reminds everyone of the gravity of the current situation and underlines that the defense of the common interest of all Belgians and the European deadlines require a very rapid solution to the political crisis," the palace said.

Both King Albert and European Union President Herman Van Rompuy urged negotiators to reconvene and come to a rapid agreement in a bid to keep Belgium's borrowing rates from spiking.

The EU has predicted that Belgium will miss the 2.8 percent budget deficit limit - and that it will break through the 100 percent debt-to-GDP ratio in 2013 - if the country does not implement major budget reforms.

Belgium's interim government, lead by Yves Leterme, is drafting an emergency budget based on the budget for 2011.

Despite numerous failed attempts to form a coalition government, Belgium's major political parties remain unable to come to an agreement over how the linguistically divided nation should be administered in the future. (13.06.2011)

Belgian politicians elected in June have been unable to form a new government for 290 days and counting - an international record. The biggest hurdle involves economic disparity between the country's two main regions. (30.03.2011)

It may not have the drama of North African migrants swamping the Italian island of Lampedusa, but Europe has another border flight quietly playing out on the frontier between Belgium and Luxembourg. (16.06.2011)